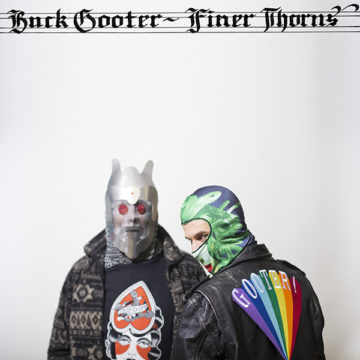 Buck Gooter is Billy Brett (vocals, synthesizer, percussion) and Terry Turtle (guitars). Finer Thorns is the duo’s eighteenth album in 14 years. It is amazing not only that the band has made so many albums, but also that the quality has increased consistently with each release.

Though not a concept album, Finer Thorns is thematically unified. Both of the members have been through hard times in the past few years, and the album reflects some of those struggles. On Finer Thorns, Brett does not shy away from personal insights and political opinions. At the end of “Joshua Rising”, the album’s chilling, relevant, and utterly brilliant conclusion, the sounds of guns being loaded (great use of electronic percussion), spacey guitar, and a ringing telephone mix with Brett’s voice as he sings, “tear down the wall”.

Buck Gooter’s blend of guitar and keyboard makes it much more than just an electronica band with a lead vocalist who screams. Though there are some loud vocals, there are also incredible melodies and heartfelt lyrics on these well-crafted songs. “The Fig Wasp”, for example, includes layers of sound, dialogue, and some of the finest guitar work this side of Link Wray. Buck Gooter often resembles a more electronic version of Public Image Ltd, not in style as much as the attitude behind the music and lyrics.

It is also amazing that the album was recorded in a single day, because it sounds neither rushed nor amateurish in production. A great deal of credit goes to the producer, Kellzo, who gave the band creative freedom and made sure that the result was captured well, succeeding on many levels. The music has a sense of urgency and energy, no doubt because the band was working on such a tight schedule. Thus, Buck Gooter took a situation that most bands would consider unworkable and made it into a defining element of the album’s sound.

Buck Gooter just keeps improving. Finer Thorns is yet another example of the members’ wit, intelligence, and ear for a good song. Complete with one of the most original album covers in quite some time (credit to photographer Paul Somers), Finer Thorns is an absolute success.

Born and raised in Whitby, Aaron discovered music through his love of The Beatles. This led to a career in radio, writing for various publications, and ultimately a radio show about The Beatles (Beatles Universe), which ran for over four years. When not immersed in music, Aaron enjoys spending time with the loves of his life -- his wife Andrea, and daughters Emily and Linda (all of whom have an intense love of music too).
RELATED ARTICLES
album reviewalbum reviewsbilly brett
10