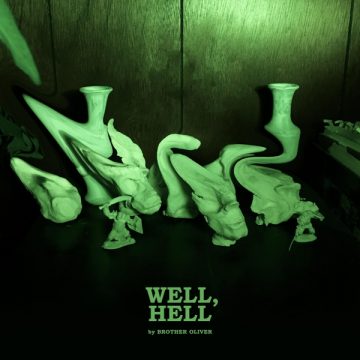 Bands with the term “brothers” in their name often are neither brothers, nor is the last name they mention connected with any of the members. Well, not this time around, as far as the South Carolina duo Brother Oliver are concerned. Yes, the two guys are brothers, and yes, their last name is Oliver.

Still, there is a tricky thing connected with their new album, Well, Hell. If you are unfamiliar with the band and somebody tells you that the most prominent instrument here is a mandolin, the first conclusion that one would make would be that it is some form of traditional folk, bluegrass, or Americana in general.

Well, yes and no. By the second track here, “Going Places/Filling Spaces”, you are already aware that the two brothers don’t bother themselves too much with clichés – the song is practically an all-out rocker – with a mandolin and a trumpet to boot, not too many steps away from how Death Cab For Cutie would sound if they used a mandolin and a trumpet.

What Brother Oliver does is shift from psychedelic to folk to rock and back throughout the album, and damn, they do it so well! A very pleasat surprise of an album.