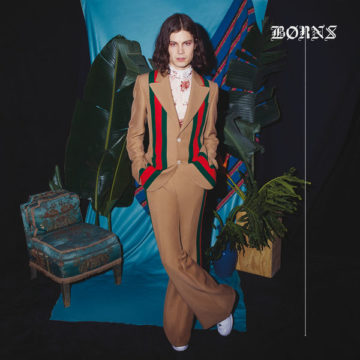 For a young man of 26, BØRNS sure knows how to make a dynamic album. Blue Madonna is his second record since 2015. Compared to his 2015 record Dopamine, Blue Madonna sounds more colourful and dreamy, with hints of organic roots. The first track, “God Save Our Young Blood,” (with backing vocals from Lana Del Rey) is very pop-friendly and would attract the common music listener. However, once you dive deeper into this record you find more unique sounds and surprising instruments. A sitar appears as the main riff on the fourth track “We Don’t Care.” Common devices BØRNS uses are backing female vocals (to match his soft and falsetto moments), drums for beats but guised over numerous electronic sounds, and an overall dreamy and calming vibe. Nothing ever really gets too sharp-sounding.

“Iceberg” is really unique and a complete standout on the record. Spooky vibes to begin with, only synths with a pop of electric guitar, but the tables turn halfway through. It gets backed up by garage drums and a swanky bass line and it’s an explosion of equal amounts of organic and electronic instrumentation. Even strings pop in for a moment! The track where the lyrics are a standout are in his last track “Bye-bye Darling,” where he makes an ode to 20th century items like paperback newspapers and landline telephones. But also makes a comment about the “accident age,” where people used to fall in love by chance, not by swiping right: “Goodbye to the accident age/I’ll miss the chance/To meet you on the street, and sweep you off your feet . . .” BØRNS’s album is a fun one to accompany a teenage movie soundtrack or a road trip among friends. Check out his music videos like “Faded Heart” for his androgynous and expressive persona.

Vicki Mahony is taking her hobbies of concerts, photography, and ranting and putting them to good use! She is a live-music photographer and reviewer.
RELATED ARTICLES
album reviewsinterscope recordsuniversal music
9.0