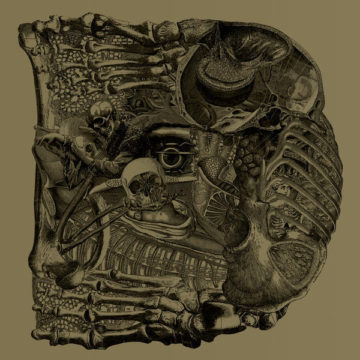 Boris’ Dear is the most “Boris” album Boris have ever made. And, just as the repeated pronunciation of the word “Boris” detaches the moniker from semantic meaning, the music contained in this sizable LP bludgeons the tropes of “metal” and “noise rock” until those labels peel back, leaving only an eroded core for us to marvel at, and for some, to worship.

Opener “D.O.W.N – Dominion of Waiting Noise” is a great introduction to the album, because it reiterates the group’s thesis of levity-via-heaviness, or, The More Weight We Add, The Easier It’ll Be To Float Away.

The recipe is unchanged: elongated riffs, wrapped in a skittering electronic jute, led forward by vocals that enter unannounced, and exit unexpectedly.

Remnants of their recent Merzbow collab can be heard all over Dear, especially in the apoplectic heights of “Absolutego” (a nod to their first album) and the fizzling outros of “Beyond”. The uncouth guitars on “The Power”, which evoke Les Rallizes Dénudés, stand in complete antithesis to the 11-minute, oddly Euro-ambient “Dystopia-Vanishing Point”—the album’s emotional crux, and a farewell of sorts to fans.

While the best track on the album is “Memento Mori”, which Boris tested extensively on tour last year—in under 5 minutes it drives up to a climax, and then slips into a gentle dénouement—the hallucinatory closer “Dear” finishes a close-second for its concussive guitar-drum interplay.

The tonality of these songs ranges from Sun O))) to Lou Reed (Metal Machine Music, not Walk on the Wild Side), and the vocals (forget the lyrics) range all the way from depressive wailing to optimistic wailing, plus occasionally some soft crooning, just to tease. The guitars, as usual, lack muzzles, and tend to blare in tidal unison.

I wouldn’t dare dismiss the wonders produced by verve and pomp in rock music, but Boris once again forgo those things, instead drawing the listener back to a more primal necessity: intensity. Atop the hillside of post-rock, surveying all those sprawling, indulgent discographies below, one thing repeatedly catches the eye, from Talk Talk to Mogwai, from to Swans to Sigur Rós, and that’s intensity of feeling. Boris are nothing if not intensely feeling.Dear is no exception.

By the end of these 10 tracks, it’s you-know-who, and nobody else. Dear should give Boris fans something to smile abou—er, brood over.