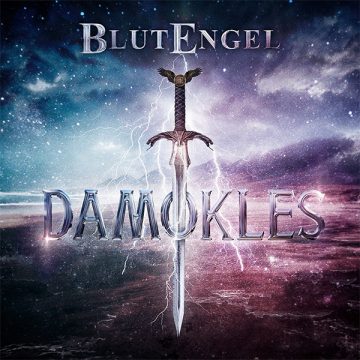 Twenty years into their career and Germany’s Blutengel are still going strong. This year, the darkwave duo have released not one but two albums: Un:Gott earlier this year, and now mini-album Damokles. It is named after the Sword of Damocles in Greek mythology and refers to the feeling of constant and immediate peril felt by those in power.

Like other works from Blutengel, this collection of tracks features lyrics in both English and their native German. Lead vocalist Chris Pohl has stated that the lyrics here dive deeper into his inner psyche having him confront his own demons and his relationship with death. What’s evident here is that their writing of English songs has definitely grown, in particular with songs like “Disobedience” and “Strong”.

What’s also noticeable on this album is their throwback to ‘80s influenced synths and drum machines that pairs with their retro album artwork. You can hear this throughout “The Search” and “Fire and Ice”, the latter of which sounds eerily similar to the theme from Halloween. This album also includes a couple of remixes including one of “Strong” by Caisaron with the eerie backing vocals feeling exceptionally nostalgic.

Admittedly so, though Damokles is a decent album filled with great songs that are sure to grow on you, there aren’t any immediate runaway hits here as I would hope. There isn’t anything immediately noteworthy the way “Reich Mir Dir Hand” was. This album will definitely grow on you however, and the more you listen, the more the songs will stay with you. The title track “Damokles”, “Briefe an Dich”, and “Another Dream” are ones I currently have on repeat.

Damokles is a solid album on its own but pairs better as a compendium to Un:Gott for a complete listening experience.

Samantha is both a writer and a fan of the arts and has been able to find numerous ways to pair the two. Eager to dive head first into writing for Spill, Samantha is an avid partaker and reviewer of live art in Toronto serving as an editor at Mooney on Theatre exploring live local theatre, she's a photojournalist for Go Globehopper, a travel, dining and tourism blog that focuses on Toronto and abroad and previously for Lithium Magazine. She's passionate about music, theatre, photography, and writing -- not necessarily in that order. She drinks tea more than coffee, prefers ciders over beers, and sings karaoke way too loudly. You can follow her on various social media including Facebook, Twitter, and Instagram.
RELATED ARTICLES
album reviewalbum reviewsblutengel
8.0