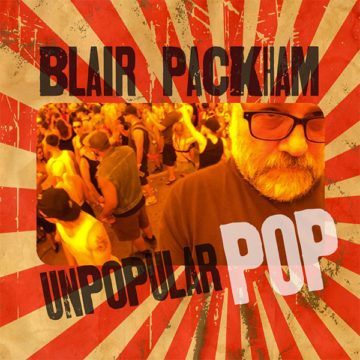 This is Blair Packham’s third solo release since leaving The Jitters, and his first album in 13 years. His last album was 2004’s Could’ve Been King. In the years between albums, it would seem that Packham has been busy and clearly writing some pretty fantastic songs.

The title of the album is firmly tongue in cheek. Unpopular Pop is an album of full of quality pop songs, as to whether they will be unpopular, I cannot say. What I can say is that this album is incredibly strong, and consists of well played, produced and mixed songs.

Packham is joined by some famous friends. Ron Sexsmith and Steven Paige provide backing vocals on “Don’t Know Why I Feel This Way” and “Loved By You”, and Paul Myers lends vocals to “The Other Side”. There were some additional guests, but for the most part, Packham provides all the instruments himself in addition to producing and mixing the album.

The songs themselves are strong and personal. There is some of the clever wordplay that fans expect, but elsewhere are some thoughtful, serious and seemingly personal lyrics. Listen to “Proof”, one of the highlights on the album.  ‘You want proof of God’s existence?’, Packham asks.  ‘Adopt an orphan, have a baby, Or fall in love without resistance.’  A brave song and one that is a beautiful work of art.

Elsewhere, Packham ponders on many subjects, time (the exquisite “Where Does The Time Go?”), ego (“Enough is Never Enough”), depression (“The Other Side”) and love (“Loved By You”).  This is Packham being himself and the result is one complete album.

Packham accompanies these terrific lyrics with catchy melodies and beautiful arrangements. The vocal arrangement in the opening song, “You (Yeah, You)” is near perfect.  Elsewhere, Packham shows off his musicianship and this is a good thing. He is a terrific player and knows when to be restrained and when to let go.

Unpopular Pop is album Blair Packham should be very proud of producing. It is a shame it has been so many years since his last album, as he has been missed.  He is doing some shows in the GTA, for which I am very excited to see.  I want to hear these songs in a live environment, but this album will be tough to beat.

Born and raised in Whitby, Aaron discovered music through his love of The Beatles. This led to a career in radio, writing for various publications, and ultimately a radio show about The Beatles (Beatles Universe), which ran for over four years. When not immersed in music, Aaron enjoys spending time with the loves of his life -- his wife Andrea, and daughters Emily and Linda (all of whom have an intense love of music too).
RELATED ARTICLES
album reviewsblair packhamblair packham records
9.0