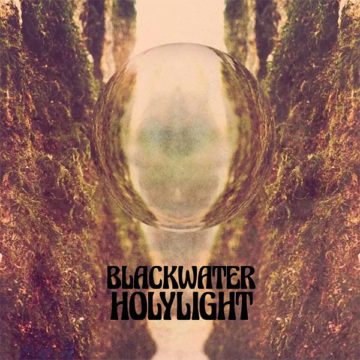 Hailing from Portland, Oregon comes BlackWater HolyLight, a slow droning psychedelic trip that blends elements of metal and noise rock on their self-titled debut record. Consisting of vocalist and bassist Allison Faris, guitarist and vocalist Laura Hopkins, drummer Cat Hoch and synth player Sarah Mckenna, BlackWater HolyLight is a highly experimental and retro release that serves as an exciting alternative to much of the clean and ambient indie rock of the day.

Opening with the slow burning and building “Willow”, BlackWater HolyLight paint a blank canvas with sparse and electric colours, creating a hazy and textured portrait. What is perhaps most interesting about “Willow” is how the song can feel light as air – largely due to the spacious atmosphere and Faris’ and Hopkins’ vocals – and sludgy all at the same time. The pace however quickens on the following song, “Wave Of Conciseness”, a song driven by a fuzzy and rhythmic riff in a style reminiscent to that of the first eight Black Sabbath records. This proves as a very interesting twist considering the noise rock and ambient alternative rock vibes that are strongly perpetuated throughout the album.

During the middle of the record however, with the bouncy and grungy “Sunrise” as the exception, BlackWater HolyLight loses its momentum. Songs like “Babies”, “Paranoia,” and “Slow Hole”, feel long drawn out and make the middle of the album feel less exciting. As an exercise in experimentation with tones, textures, and structures though, they prove to be a deep look at the level of creativity found in BlackWater HolyLight’s song writing, but for a casual listen, they take a while to develop and pick up. That being said, this does not stop BlackWater HolyLight from being a strong debut for the band.

BlackWater HolyLight is an experimental adventure unlike anything you’ve heard. Taking cues from artists like Sonic Youth, Black Sabbath, Pink Floyd, and Jane’s Addiction, the band’s debut is incredibly heavy without the distinctive heaviness that we have come to expect. It is such defiance to musical customs and expectations that makes BlackWater HolyLight such an interesting and intriguing band with a compelling self-titled debut release.

A passion for music has always been a part of Gerrod’s life. As a young boy, he was raised on a steady diet of the music from The Chili Peppers, Aerosmith, The Stones, Prince, and others from his mum. Raised in the GTA, Gerrod continued to foster his love for music by attending a wide range of concerts and learning the drums. His unapologetic passion for music has no bounds and has spread to a wide variety of styles, whether it be the 90’s rock that sound tracked his teenage years, the jazz he studied in university, or his newfound love for hip-hop. He recently received his bachelors in music and education from York University and is passionate about writing and reviewing good (and less than good) music. Gerrod is also the drummer and songwriter for a Toronto based rock & roll band, One In The Chamber.
RELATED ARTICLES
album reviewsblackwater holylightridingeasy records
8.0