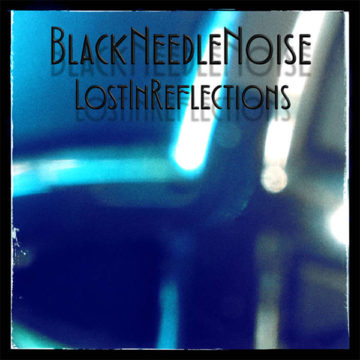 Black Needle Noise is a project from John Fryer. If that name sounds familiar to you, it’s because he has been making music, usually as a producer, since 1979.  Go to your record collection, look at the producers and you will see his name.  He has produced, Depeche Mode, Yazoo, Wire, Love and Rockets and many many more. He was also the only consistent member of one of the most unique bands of the 1980’s, This Mortal Coil.  Black Needle Band is the third ‘band’ (or rather project) with which he has been involved.

Lost In Reflections is the second album by his most recent project, Black Needle Noise. The album features different vocalists on the eleven tracks on this album. Featured vocalists include Kendra Frost, Omniflux, Andrea Kerr and many more. Fryer picks vocalist who fit the style of the music. For the most part this works.  Fryer has an amazing ear.  He writes memorable melodies and brings it all together with the guests.

The album has a definite 80’s feel to it, and that is a good thing.  Fryer is not reliving past glories but rather dipping into an era and influence that suits him and the songs. The final track, “Neon Noir” featuring Dr. Strangefryer, is one of the highlights as it has an ‘80’s feel and influence but yet sounds 2017.  This is a true talent, bringing two diverse eras together.  He does this throughout the album.  Fryer knows how to arrange and produce. .

The songs do sound like an extension of This Mortal Coil, and that is not a bad thing. It is the same format as that band (and the unofficial offshoot band, The Hope Blister) and the overall tone is very similar to both bands.  Not so much a copy or a sequel but a continuation. He does paint audio landscapes, the layered sounds, the vocals and the melodies all fit together.  Each song deserves several spins to get the most out it.

The songs themselves are strong, moody, melodic, atmospheric and in some cases quite beautiful. Every track plays like a single. In other words you can take any one song off the album, and just play it as a track.  Although the album is sequenced quite nicely, the songs do not form a cohesive album that requires one to listen to it from beginning to end for best effect.  Any one song can be downloaded, so it is more of a collection of singles than an album.

There are several highlights throughout and fans of his early work with This Mortal Coil will welcome this album into their collection.

But then the same could be said for the first album from Black Needle Noise.  It is a great album full of great songs.

Born and raised in Whitby, Aaron discovered music through his love of The Beatles. This led to a career in radio, writing for various publications, and ultimately a radio show about The Beatles (Beatles Universe), which ran for over four years. When not immersed in music, Aaron enjoys spending time with the loves of his life -- his wife Andrea, and daughters Emily and Linda (all of whom have an intense love of music too).
RELATED ARTICLES
album reviewsblack needle noisejohn fryer
8.0