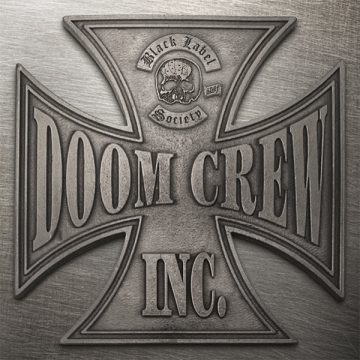 Following up their last album, 2018’s Grimmest Hits – and 2019’s remastered 20th anniversary reissue of Sonic Brew, Black Label Society is back with their 10th studio album, Doom Crew Inc. The 12- track record sees Zakk Wylde return to the band’s visceral roots, while simultaneously continuing through with the tone of his recent records, making Doom Crew Inc. their strongest release in years.

Doom Crew Inc. opens with the soft acoustic chord progression of “Set You Free”. The melodic passage, while surprising for a Black Label Society opening track, quickly makes way for the song’s riff which ushers in a hard-hitting beast of a song. Driven by a pulsing, Sabbath-inspired riff, “Set You Free” excels for its simple yet sophisticated development. The song comes to a climax with the incredible solo section that grows to shredding highs from its melodic start. The album continues forward with the raw bombast of “Destroy & Conquer”, a shuffling riff performed with a blistering tenacity, making it a definite highlight on the album.

Throughout the course of the record, Black Label Society blasts through hard-rocking bangers and stirring ballads with equal levels of conviction, making their performance all that much more powerful. Ballads, such as “Love Reign Down” and “Forever And A Day”, are well written and develop beyond where most heavy bands would take a softer song. That being said, while Wylde has proven his worth as a well-versed singer and songwriter with far more range than many would expect, Black Label Society is at their best when they’re at their heaviest and when the solos leave your jaw on the floor, and Doom Crew Inc. is no exception. Songs like “Forsaken”, “Gospel Of Lies”, and “Ruins” are driven by crushing riffs and propel the album forward. The clear outlier of the collection of songs is “Gather All My Sins”, a visceral blues song featuring a killer riff and an extensive solo section that sees Wylde trade back and forth with guitarist Dario Lorina in a remarkable fashion. Beyond the monster of a solo section, “Gather All My Sins” is a exceptionally written song that ebbs and flows through peaks and valleys, making for a thoroughly exciting track.

While Black Label Society may not be reinventing the wheel on their latest album, Doom Crew Inc. proves to be a tour de force. The band effortlessly finds its place between rock and metal while balancing elements of blues and classic rock along with heavier and sludgier influences, along with the occasional but no less soulful ballad. Doom Crew Inc. takes the band beyond the limits of their recent albums while digging deep with their heavier roots. As a result, it can stand beside their classic records as a strong addition to Black Label Society’s catalogue, making it a latter career highlight for the band.

A passion for music has always been a part of Gerrod’s life. As a young boy, he was raised on a steady diet of the music from The Chili Peppers, Aerosmith, The Stones, Prince, and others from his mum. Raised in the GTA, Gerrod continued to foster his love for music by attending a wide range of concerts and learning the drums. His unapologetic passion for music has no bounds and has spread to a wide variety of styles, whether it be the 90’s rock that sound tracked his teenage years, the jazz he studied in university, or his newfound love for hip-hop. He recently received his bachelors in music and education from York University and is passionate about writing and reviewing good (and less than good) music. Gerrod is also the drummer and songwriter for a Toronto based rock & roll band, One In The Chamber.
RELATED ARTICLES
album reviewalbum reviewsblack label society
9.0