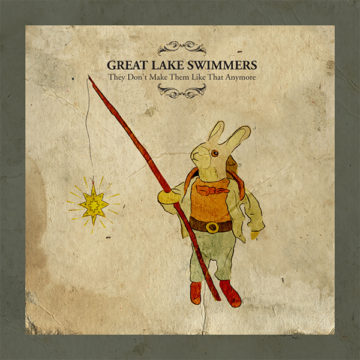 Great Lake Swimmers return after 2016’s EP Swimming Away, with the ever appropriately titled EP, They Don’t Make Them Like That Anymore. This one is a four track Christmas themed EP featuring two new songs and two traditional Christmas songs. They Don’t Make Them Like That Anymore is an beautiful set and I sincerely wish they had made an album instead of just an EP. It is also the perfect title for this EP.

The title track “They Don’t Make Them Like That Anymore” is one of the most melancholic Christmas songs since Judy Garland sang the original lyrics of “Have Yourself A Merry Little Christmas”. Julie Doiron adds haunting harmonies that further adds to the beauty of this track. For those who have loved ones not with them at Christmas, this song is custom made for you. This song focuses on those missing, rather than those gathered around the table. Heartbreaking.

The mood does not lighten with the second original song, “Ink For A Star”. More of a musical and lyrical collage of all that comes to mind when thinking of Christmas, but again, it is the nostalgic feeling and the sense of loss that haunts this song. It is a stunning song, beautifully played, just very melancholic.

Great Lake Swimmers round out the set with two very traditional Christmas carols. “It Came Upon A Midnight Clear” (dating from 1849) and the seldom heard, but much loved, “Bring A Torch, Jeannette, Isabel” (dating from the 17th Century). These are traditional versions, acoustic and quite simply sublime.

Suffice to say, this is an EP that would not be ideal for the annual Christmas party. We see it as more for those moments of silent reflection after a busy day of preparing for Christmas. They Don’t Make Them Like That Anymore is a reminder of the meaning of the holidays and as a a reminder for all of us in Charles Dickens’ words, that Christmas is “a kind, forgiving, charitable time.”

Born and raised in Whitby, Aaron discovered music through his love of The Beatles. This led to a career in radio, writing for various publications, and ultimately a radio show about The Beatles (Beatles Universe), which ran for over four years. When not immersed in music, Aaron enjoys spending time with the loves of his life -- his wife Andrea, and daughters Emily and Linda (all of whom have an intense love of music too).
RELATED ARTICLES
album reviewsgreat lake swimmersnettwerk
7.0