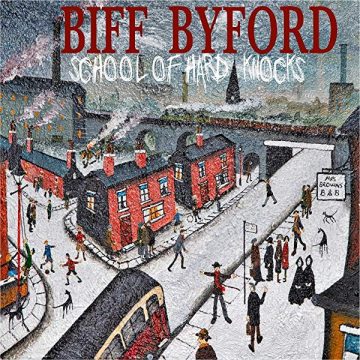 Anyone who was in an English High School in 1980 could not have missed Saxon’s Wheels of Steel, it was the album every teenager into rock was carrying around with them. Many years later, lead singer Biff Byford has released one of the most confident and assured of rock albums.

This is an album that oozes quality, and is rooted in the old north of England. It speaks of times long past, and holds the ghosts of memory, of King Eadred with his sword in his hand, heading off to meet Eric Bloodaxe, Viking king.

Byford opens up with a stomping “Welcome to the Show” and instantly connects. Reminiscent of Kiss’ Psycho Circus, it sets the album off at a pace, connecting to the Saxon fans listening in.  Byford does not, however stay entirely in metal mode, and the album gets the thumbs up as he ventures into exciting territory, pushing what his audience may expect.

A couple of standouts include a cover of “Scarborough Fair” and a truly lovely ballad, “Me and You”. “Scarborough Fair” reminds us that Byford could happily have been a minstrel of old, pulling up into the Saxon hall and having a mead, before singing a few songs and telling a few tales. This is seemingly what Byford intends to do on his next tour, mixing story and song for an audience that has followed him for decades.

He is one of the gentlemen of rock; a survivor, and someone who still knows how to deliver the goods. Aided by among others Motorhead’s Phil Campell among others, this is an album that will be up there with the best rock releases of 2020.

The Spill Magazine is a Toronto-based online publication dedicated to covering the independent music scene with a strong focus on our thriving hometown talent. Our writers bring you up-to-date news, in-depth features on musicians and reviews for the latest CD releases. We also travel to the front lines for all local festivals including Canadian Music Week and North by Northeast. Don’t forget to check out our Facebook and Twitter pages for all daily Spill updates.
RELATED ARTICLES
album reviewalbum reviewssilver lining music
10