SPILL ALBUM REVIEW: BEN PIRANI – HOW DO I TALK TO MY BROTHER? 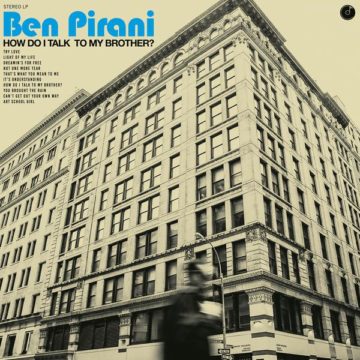 Ben Pirani
How Do I Talk To My Brother
Colemine Records

How Do I Talk To My Brother? is his debut album. He has released a few singles, both as a solo artist and a member of a band. This album may have been a long time coming, but it is well worth the wait. Pirani has taken time to perfect his craft and his style, and his style is pure soul.

Piani demonstrates his knowledge and understanding of a style of music that, in some ways, has disappeared over time. How Do I Talk To My Brother? takes the listener back in time without being a retro record. Pirani is recording soul music in 2018 but he records his music as if he has been making it for a decade. There is a maturity to his voice and his music and it comes through as one listens to the album.

The other thing that one must admire about How Do I Talk To My Brother is that it is an album. This seems to be a very positive trend of late — artists who approach an album as a whole and not just as a collection of songs. It is a personal, almost confessional concept album. The best soul music is confessional and here Pirani taps into that style and feeling.

The album opens and closes with “Try Love”. Exploding with a solid drum beat, and a great horn arrangement, Pirani bursts forth with his great vocals “Try love”, he says, “it’s wonderful”. Here sets the scene, love is going to be the salvation for the problems that will follow, and problems do follow.

Listen to the second song “Not One More Tear”, an energetic song acknowledging the hard times, but “not one more tear will I cry” sings Pirani defiantly.  And as one listens, one feels his resolve through this strong song. The album moves on to other sounds and wonderful lyrics. There are ballads, and the title track features some of the best vocals I have heard this year. The almost acapella song features tight harmonies and wonderful soulful lead vocals. The effect is quite chilling.

SPILL ALBUM REVIEW: BEN PIRANI – HOW DO I TALK TO MY BROTHER?

Born and raised in Whitby, Aaron discovered music through his love of The Beatles. This led to a career in radio, writing for various publications, and ultimately a radio show about The Beatles (Beatles Universe), which ran for over four years. When not immersed in music, Aaron enjoys spending time with the loves of his life -- his wife Andrea, and daughters Emily and Linda (all of whom have an intense love of music too).
RELATED ARTICLES
album reviewalbum reviewscolemine records
8.0