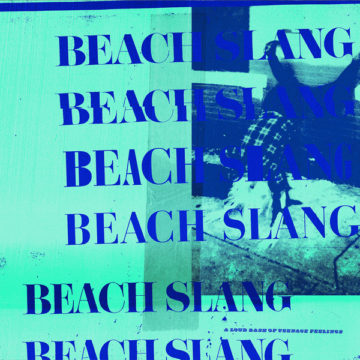 In the short time since the release of their 2015 full-length debut, The Things We Do To Find People Who Feel Like Us, Beach Slang has kept busy. They’ve toured extensively, nearly broke up, and had their drummer JP Flexner quit. Now, nearly a year after critically applauded debut they’ve released the honestly titled A Loud Bash of Teenage Feelings which contains all the teenage angst-ridden songs of youth that you’ve come to expect from Beach Slang.

Beach Slang’s sound hasn’t really changed much since in the past year, they still echo the influence of 80s punk rockers such as The Replacements, Psychedelic Furs, and Jawbreaker. Their loud and distorted instrumentals blend perfectly with lead vocalist James Alex’s sincerely hollered lyrics.

Lyrically however, a subtle yet important change has taken place. Alex’s lyrics of youthful bliss and sloppy romance seem increasingly aware of the harshness of reality and the futility of youth. He evokes feelings of a young man’s blues while singing from a grown man’s perspective and presents witty lines and catchy hooks that form a prefect soundtrack to summers gone by. As he wrote a lot of the album while touring his lyrics are undoubtedly affected by Beach Slang’s close call with disbandment and are slightly darker and more focused upon death and endings. Songs like “Wasted Daze of Youth” show a more sinister side of youthful rock ’n roll while “Punks in a Disco Bar” arrests you with its ear-catching hook.

Overall Beach Slang’s brutal sincerity shines through A Loud Bash of Teenage Feelings and while it doesn’t show anything terribly revolutionary for the band it won’t disappoint fans looking for a continuation to their previous work. These Philadelphia rockers have cemented their youthfully unabashed sound upon fan’s ears and continue to present captivating and enjoyable tracks. Hopefully this band will remain together long enough to present another high-calibre album.

Beach Slang is currently touring in support of their latest Polyvinyl release.

I am an Edmonton based musicophile and photographer who loves experiencing music whether it's live or on my turntable. I play seven instruments and go to a lot of concerts.
RELATED ARTICLES
album reviewsbeach slangpolyvinyl records