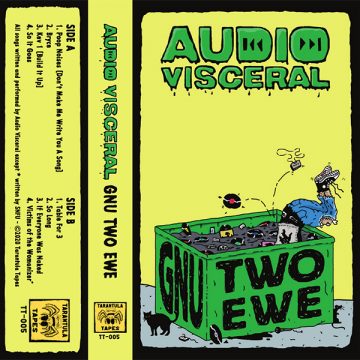 Hailing from Vankleek Hill, Ont., Audio Visceral, is a three-piece punk outfit of beer drinking deviants. They have just released Gnu Two Ewe, after having partnered with Tarantula Tapes. The album is available as a digital download and on cassette.

Gnu Two Ewe opens with “Poop Noises (Don’t Make Me Write You A Song)”, a track that perfectly captures the tone, style, and sound of punk rock from the ‘70s. Setting the tone for the rest of the album, Audio Visceral set themselves to be The Ramones with enough of a crust punk ethos for 2020. This is only furthered with the catchiness and the rhythmic bop of the following track, “Bryce”.

Perhaps my favourite part of Gnu Two Ewe is its rough edges and all round aggressive tone. While most punk bands of the last two decades have sugar-coated their sound with glossy production techniques in hopes of catching the pop punk train, Audio Visceral pay homage to the likes of The Ramones and The Vandals with a wall of fuzz, distortion, gang vocals, and overbearing cymbal ring. Among the eight songs, “Kev 1 (Build It Up)”, and “Victims Of The Womanizer”, along with the opener stand as highlights.

Without reinventing the wheel, or even remotely attempting to, Audio Visceral has delivered an eight-track record that, in its 21-min run time, delivers a wave of rough, aggressive, and fun as all hell punk rock from generations ago. While it may be over before you know it, Gnu Two Ewe is a record you can easily keep on repeat all day.

A passion for music has always been a part of Gerrod’s life. As a young boy, he was raised on a steady diet of the music from The Chili Peppers, Aerosmith, The Stones, Prince, and others from his mum. Raised in the GTA, Gerrod continued to foster his love for music by attending a wide range of concerts and learning the drums. His unapologetic passion for music has no bounds and has spread to a wide variety of styles, whether it be the 90’s rock that sound tracked his teenage years, the jazz he studied in university, or his newfound love for hip-hop. He recently received his bachelors in music and education from York University and is passionate about writing and reviewing good (and less than good) music. Gerrod is also the drummer and songwriter for a Toronto based rock & roll band, One In The Chamber.
RELATED ARTICLES
album reviewalbum reviewsaudio visceral
8.0