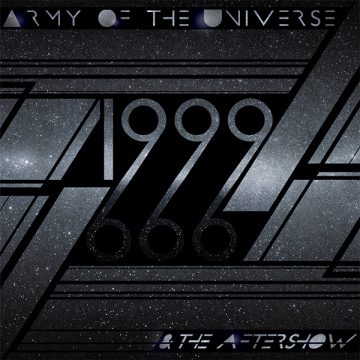 Army Of The Universe
1999 & The Aftershow
Metropolis Records

Throughout listening to this album I was excited, entertained and confused. Army of the Universe’s newest release 1999 & The Aftershow sounds like a mashup of many greats from the 1990s and the early 2000s. They intertwine Grungy guitar lines and upbeat electronic drums, bouncing EDM leads with distorted Hardcore basslines. During this album I remembered the sounds of: Nine Inch Nails, Lit, The Prodigy, Powerman 5000, and The Faint (to name a few). I enjoyed the dancey Hard Rock vibes of “Nobody 2.0,” which combined 8-bit sounds, analogue synths and grinding guitars. The catchy sing-along hook of “Another Escape” is another standout — taking EDM production on a seemingly anthemic Rock tune.

The Italian Industrial Dance Rock group formed in 2008 and now resides in Los Angeles. The band seems to evoke a culmination of all the bands listed above — and they do it well. The sound is refined and distinguished, clearly well thought out, the songwriting is great, the production fantastic. Nevertheless, they seem to be doing something outdated, which we can assume is the intention from name of the album and its two title tracks. Army of the Universe produces a sound I enjoy; it brings me back to a place in music that I knew and loved very much. The album 1999 & The Aftershow feels like a dark underground trance party played by a live band that grew up listening to Trent Reznor & Rob Zombie. However, those bands — and this sound — seem to have come and gone. I don’t mean that in the sense that a band shouldn’t stick to an older sound, I mean it in that I didn’t feel like this album showed me anything new and different that I hadn’t heard somewhere in my past. Overall, the album is impressive and a great listen.

After majoring in business & entrepreneurship at UCSB and traveling the world, Andrew moved to Los Angeles to pursue music and not give up his love for surfing, hiking and yoga. He is also in a couple really cool, up and coming, indie-rock bands in LA - Mothlight & Lone Kodiak.
RELATED ARTICLES
album reviewsmetropolis records
8.0