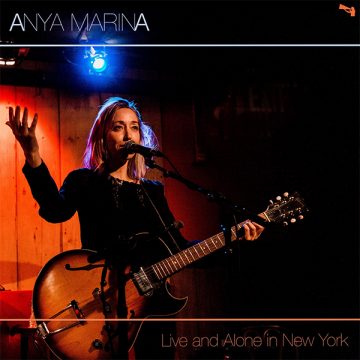 You know your friend that’s a hot mess but has impeccable taste and style? Anya Marina’s Live and Alone in New York is a conversation with that friend. Her storytelling throughout the album by means of her lyrics and the accompanying intros purvey both a depth and a sense of humor that I’ve only seen coexist in the best romantic comedies. There’s a beautiful contrast between these moody verses that sound like they belong to this image of cigarette butts and empty whiskey glasses and these sparkling choruses that are connected by beautiful, simple instruments. The modesty in instrumentation allows space for her vocal style to truly engulf you in the images she paints.

Anya’s voice throughout this live album has that same emotional magic you hear in songs like Jewel’s “You Were Meant For Me.” Even when she’s covering songs like Taylor Swift’s “The Man,” she has a way of flawlessly connecting to it and incorporating them into her set. The most magical moments on the album are when Anya allows this gentle grit to caress her vocals. “Clean And Sober” has this surprising glimpse of a change of pace that is much needed and welcomed, and she particularly soars during songs like “Queen Of The Night.”

By the end of the album you feel personally connected to Anya. She leaves you heady, tinged with a sadness like a glass of red wine. Overall, Anya Marina delivers a beautiful performance on Live and Alone in New York.

Wilson Knight is a pop artist and songwriter. He was born and raised in southern California and first found his love of music through the pop wave that took over the world in the late ‘90s. Since then, he has found love in all types of music and artists. He has written for Huffington Post and has had his music featured on numerous publications.
RELATED ARTICLES
album reviewalbum reviewsanya marina
9.0