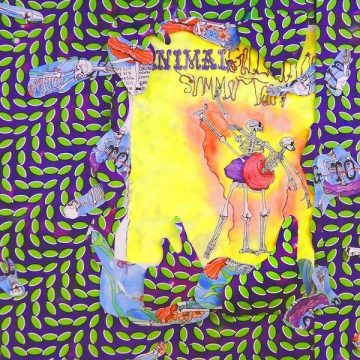 In 2009, Animal Collective released their seminal Merriweather Post Pavilion LP, an experimental collection of mind-bending nooks and crannies.  Ten years later comes Ballet Slippers, a twelve-song chronicle of three live shows supporting the album, all mixed together as one, truly a spectacle of the greatest points of the shows.

Culling from three different performances — House of Blues in Las Vegas on May 30, The Boulder Theatre in Boulder, CO on June 2, and Culture Room in Fort Lauderdale, FL on June 9 — and mixed by one Noah Lennox of Panda Bear, Ballet Slippers presents these songs in a new order, inspired by both the setlists and the supported album order. One thing each show clearly presents is all three members at the top of their games — Avery Tare and Panda Bear at the height of what they do, sounding miles away, like The Beach Boys for the 2010s.

Opening, as they did their album and each show, with the woozy “In the Flowers”, Tare and Panda Bear’s vocals echo, to the enthusiastic cheers of the crowd. One highlight of the album is the transition from song to song — a flawless exercise that would leave one refusing to look at album labelling as assuming the discs as one cohesive show. Taking a detour with the incomprehensible dizziness of “Who Could Win a Rabbit?”, the Pavilion attention returns with the bouncy “Summertime Clothes”, echoing around as it picks up speed into the next song.

Tare and Panda Bear deliver their vocals without any hesitation, repeating every hook over, as if a chant. In “Guys Eyes” they repeat “as I use my mind” until the words have no meaning anymore. On the Pavilion highlight “My Girls”, Panda Bear echoes as if he’s at the top of mountains some years away. Chimes surround like colours.

The album is sure to include the 2009 concert staple of the medley of “Fireworks” along with older cuts “Lablakely Dress” and “Essplode”, lasting a full 20 minutes and 13 seconds. This jam goes into different patterns, eventually calming down into a synth heartbeat, as vocals rush away like waves on a shore.

With Ballet Slippers, Animal Collective is found on stage performing what could be called their greatest album as if it was the studio piece itself. It’s a hazy performance that fits the album it supports, a companion that is essential to every Collective fan, or any appreciator of music in general.

King Dawit considers himself the Psychedelic Cowboy. Raised on The Beatles, Queen, The Rolling Stones, and Crosby, Stills, Nash, & Young, you will never find Dawit listening to the same thing two days in a row, whether it be '70s progressive rock or late '60s Baroque pop. Dawit is also a Toronto-based writer, filmmaker, and music producer. Among his favourite writers are Hunter S. Thompson, Terry Southern and Lester Bangs.
RELATED ARTICLES
album reviewalbum reviewsanimal collective
8.0