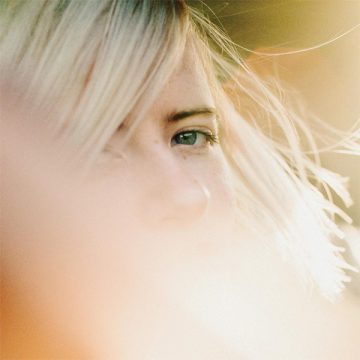 Summer is on its way to Canada, and even if the weather hasn’t quite turned sunny enough for your liking yet, there’s no reason you can’t begin crafting your perfect summer playlist. Amber Arcades deserves at least one spot on that list. Its debut album, Fading Lines, is filled with Rock and Pop that shimmers and reflects, like a swimming pool on a hazy day.

Dutch singer-songwriter Annelotte De Graaf took a big risk in creating this album. She is a member of the close-knit community of Indie musicians in the Netherlands, but decided that Amber Arcades was a project she wanted to take stateside. She reportedly tracked down Ben Greenberg – who has produced many of her favourite albums – and spent her life savings to fly to New York and record an album, equipped with little more than GarageBand demos made at home. The risk paid off in a big way.

Fading Lines kicks off with the wide-open, echoing “Come With Me,” a tune that motors forward on an incessant drumbeat from Real Estate’s Jackson Pollis, with help from Shane Butler and Keven Lareau of Quilt on guitar and bass. But just when you think you have a feel for the mood the album is going for, “Constant’s Dream” clears away the noise in favour of stripped-down reverb and touches of bells and organ. Is it too easy to call this a dreamy song? Sometimes, the easiest answer is the best.

Up next is the title track; you’re back on the drive, and the pattern of Amber Arcades’ moods becomes apparent. The upbeat tracks on Fading Lines are relentless and cheerful, but slathered with enough guitar effects to avoid being called sugary Pop music. The down-tempo numbers are bare and ethereal. What you’ll notice throughout the album is a sense of space, of airy atmosphere. The guitars and vocals are sunk in heavy levels of reverb, and there is plenty of room for a wall of sound behind the bones of De Graaf’s introspection.

The songwriting and lyrics on this album might be considered minimal, but that isn’t meant to imply a lack of effort. When the structure is simplified like this, there is plenty of opportunity to put meaning into the feelings, sensations and memories that can be drawn out of the listener.

Interpretations will always, of course, vary widely from one person to another. But it is not hard to imagine these songs as the soundtrack to a sun-soaked day. The humid, sticky air that accompanies an early sunrise. The shimmering heat of the afternoon, whether in the shade or on a city rooftop patio. The rich orange dusk, in a convertible heading down the coast out of the city. Whether you have actually experienced any of these before, or seen them in a movie – maybe a car commercial, but this music is more sincere than any ad might be – Amber Arcades paints a picture and takes you there.

For standout tracks, check out the gorgeous tick-tock and slide guitar of “Apophenia,” and the buzzing rush of “Turning Light” and its joyful noisy departure. The group will be touring summer festivals in the U.K. and Netherlands in the coming months, so keep an eye out if you’re in the neighbourhood. For the rest of us, there won’t be a problem finding room on our summer playlists for Amber Arcades. In fact, the problem might be trying to resist keeping the whole album on repeat from here to September.

Shane believes in music – the more honest, the better. He listens with his ears, which are really just a tool of the brain, which is definitely and completely subject to the whims of the heart. It's really a team effort.
RELATED ARTICLES
album reviewsamber arcadesfading lines
8.0