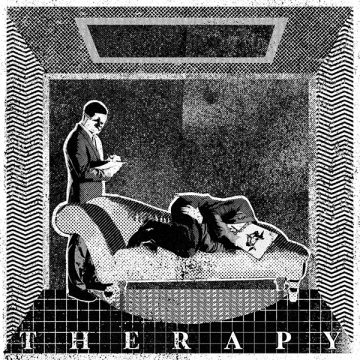 Following the release of their debut single, “Safe Sinner”, earlier this year, Alive Alone has released their debut studio EP, Therapy. The rough, hard-hitting, and abrasive six-track release marks a strong and unique entry point for the Chicago-based alternative metal band that is certainly worth checking out.

Therapy comes to a chaotic open with “Death In Pretty Flesh”, a track that easily could fall off the rails on more than a handful of occasions, yet remains explosively intact and fiery in its attack. The following track, “Can’t Take”, however, takes a catchier, straight ahead approach. The variation in songwriting and performance is refreshing, and demonstrates a great level of potential for what is to come from Alive Alone beyond this EP.

Therapy continues with such a fusion of melodic alternative rock and blistering heaviness. “Sorry” takes shape of a dark pop punk banger while “Bleed” is straight up bizarre in its haunting grip that it holds on the listener. While the closing tracks “Same” and “Not Now” teeter more to the former, the two are further examples of Alive Alone’s ability to blend metal into pop punk. That being said, it is worth noting that the contrast between the first two songs simply isn’t as stark throughout the rest of the EP, something which may have made some tracks stand out better.

There is an element of Alive Alone that is strongly reminiscent of the raw aggression and quirky songwriting and instrumental tones of early System Of A Down. Add in a touch of 2000s rock, some pop punk for good measure, and a whole lotta angst, and you have Therapy. The record is rough, volatile, and raw, and while the band could benefit from a slightly more polished performance, Therapy is a unique trip into a rarely charted soundscape that will leave fans eager for what comes next.