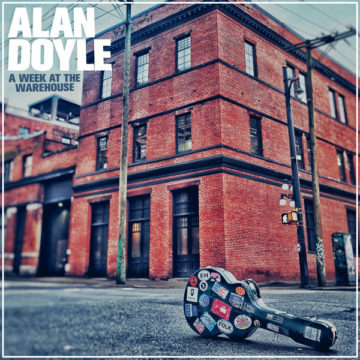 This is solo album number three from Alan Doyle, of Great Big Sea fame. The band called it a day in 2015 (or retired they called it) and Doyle has been very busy since. A Week At The Warehouse is album number three. It hits the stores four days before his second book, A Newfoundlander in Canada, Always Going Somewhere, Always Coming Home is released. On top of all of that, he is getting ready for a North American tour. As I said, very busy.

There is no need for overdubs, the band handles their instruments beautifully and together produce a tight, solid sound. Much of the credit for the excellent album lies with this band, Kendel Carson (fiddle), Cory Tetford (guitar), Todd Lumley (piano), Shehab Illyas (bass) and Kris MacFarlane (drums). This band sounds like they have been playing together for years instead of the relatively short time they have been playing as a band.

The other interesting aspect of this album is the cover of The payola$’s “Forever Light Will Shine”, which features guest vocalist Paul Hyde (Rock’s partner in The Payola$). A brilliant cover that rivals the original.

As for the songs, they are Alan Doyle songs. New country with a tinge of East Coast flavour. The songs are all custom made for radio, well produced and well played. They are melodic with a great deal of energy and overall extremely great songs. The album plays as a collection of songs, rather than a cohesive album, but that is fine, each song blends into the next and they sound great.

This album is perfect for fall weather listening and it is sure to not disappoint fans of Alan Doyle or Great Big Sea.

Born and raised in Whitby, Aaron discovered music through his love of The Beatles. This led to a career in radio, writing for various publications, and ultimately a radio show about The Beatles (Beatles Universe), which ran for over four years. When not immersed in music, Aaron enjoys spending time with the loves of his life -- his wife Andrea, and daughters Emily and Linda (all of whom have an intense love of music too).
RELATED ARTICLES
alan doylealbum reviewsgreat big sea

by Aaron Badgley on November 15, 2017
CANADA’S TRIPLE THREAT A CONVERSATION WITH ALAN DOYLE It is hard to know where to start when writing an article about Alan Doyle. Everything this man touches seems [...]