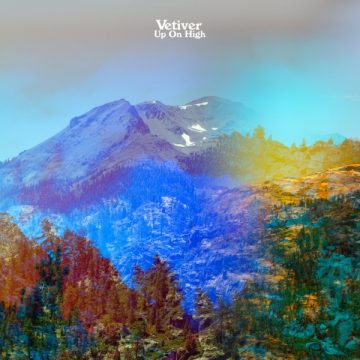 Four years since his last album Complete Strangers, Vetiver returns with Up on High, a groovy, chilled-out acoustic-driven collection of songs that feature poetic, imagistic lyrics and a hopeful tone from song-to-song that reflects a certain kind of weathered contentedness with life that is refreshing and, dare I say, relatable.

First, the lyricism here provides much to ponder and much to relate to, and is already calling me back for further listening. From the opening track “The Living End” all the way through the title track “Up on High” at the back end of the album, Andy Cabic’s soft, soulful, scratchy voice is front and center and reveals a thematic concern with his own current circumstances in life, what’s coming and what’s already gone, how to feel about it all, and where to go next. That being said, he doesn’t seem to be in a rush, choosing instead to enjoy the moment he is in.

The end result here seems to be a set of songs by someone who is equal parts world-weary and experienced, but also aware enough of his own weariness to have developed a gratitude for the understanding and insight that has been gained by it all. To be world-weary, the premise goes, you must have some life experience to be world-weary of, and Cabic has made an album that manages to rise triumphantly above it all, at least temporarily, like someone sticking their head out the car window to feel the wind on their face for the first time in a while. Here, he has taken an old life, breathed it all in, and breathed it back out again in a long satisfied exhale.

Lyrics like “For now we have all we could want,”, “what’s past is past, wanted, never asked,” and

“I’m on the outside looking in/
Tell me where do I begin?/
Tomorrow waits for you and I/
Up on high,”

from the title track suggest someone pausing to look around before deciding where to go next, a thematic concern that arises in virtually every song.

Musically, I kept thinking of the early Brushfire Records days of Jack Johnson and Donavon Frankenreiter—especially Frankenreiter’s self-titled album—mostly for their similar chillness and ease with the world, with one difference being that Vetiver’s sound is more awash in a hazy twang with crystalline guitar-picking at times in which you can often hear fingers sliding up and down the strings. I can also hear tinges of Tom Petty, Paul Simon, and R.E.M. here as well depending on the track.

Overall, this is a consistently beautiful and poetic album whose lyricism and chill optimism offers a replayability and relatability that is highly enjoyable from the start and whose overall sound places it squarely amongst some truly great, chilled out albums of yore.

Dan Kennard is an English teacher and fiction writer living outside Kansas City, Kansas where he lives with his wife and children. More about his work can be found at amazon.com/author/dankennard. You can also follow him on Twitter and Instagram @kennardistry or contact him at [email protected]
RELATED ARTICLES
album reviewalbum reviews
9.0