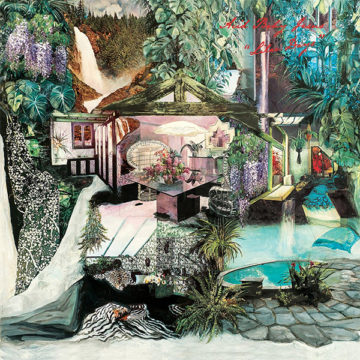 Acid Baby Jesus’ 2011 self titled debut album was one of those records that seemingly sprung from nowhere. Straight out the gate with psych guitars blazing and self assured garage roars, it immediately captured hearts and established the band’s extensive touring career. But with the departure of their former guitarist Otto Mentis partway through the recording of their second release, there was certainly some curiosity as to the direction of the band’s third LP Lilac Days.

Whether Lilac Days surprises or disappoints would depend on the context the listener places on the record. ABJ fans expecting a direct follow up to the rambunctious attitude of previous releases will miss the mature nuances of Lilac Days’ cleaner sound. New listeners can quickly brush over the LP’s nod to the 60’s era of unfussed pop as a fruitless quest for originality. Three years in the making, the band have moved on from the chunky riffs of their former selves with sweet guitar inflections on tracks like “Faces of Janus” and “Lilac Days” presenting a crisper tonal clarity and greater attention to melody.

What sets these guys apart is a matter of place. Hailing from Athens, Greece, their sound is something that’s oh-so-familiar yet refreshing, with its twist of American R’n’B and Mediterranean traditions. Tracks like “No Such Thing As Twice” and “Down the Ley Lines” remind us of the universal appeal of guitar music, meshing Greek folk counterpoint on a bed of Western rock and roll twang. Like the origins of Dick Dale’s famous “Miserlou” to a native Greek Rebetiko song, ABJ’s cross-culture narrative prods us to rethink music not strictly defined by nationalism, but a creative expression of derivatives. Songs like “Love Has Left My House Today” take this meshing of folk and popular styles further with its disparate segments, breaking in and out of sinister bass lines and prog rock jams.

Crowd pleasers on the album are the more uptempo “Me & Panormita” and “Guide Us In”. The former a crunchy return to the insatiable strums of garage rock, the latter a well lubricated punk track that glides through thick chord changes and a punchy chorus repetition. At its heart, Lilac Days is an easy going album that unashamedly relishes in a genre that hasn’t stopped pumping out bands since the ’60s. Because, why not?

Michelle La is a freelance writer based in Melbourne, Australia. She is the Editor of Cat Brain Land, a music blog that loves new and alternative music from Asia and Australia.
RELATED ARTICLES
album reviews
7.0