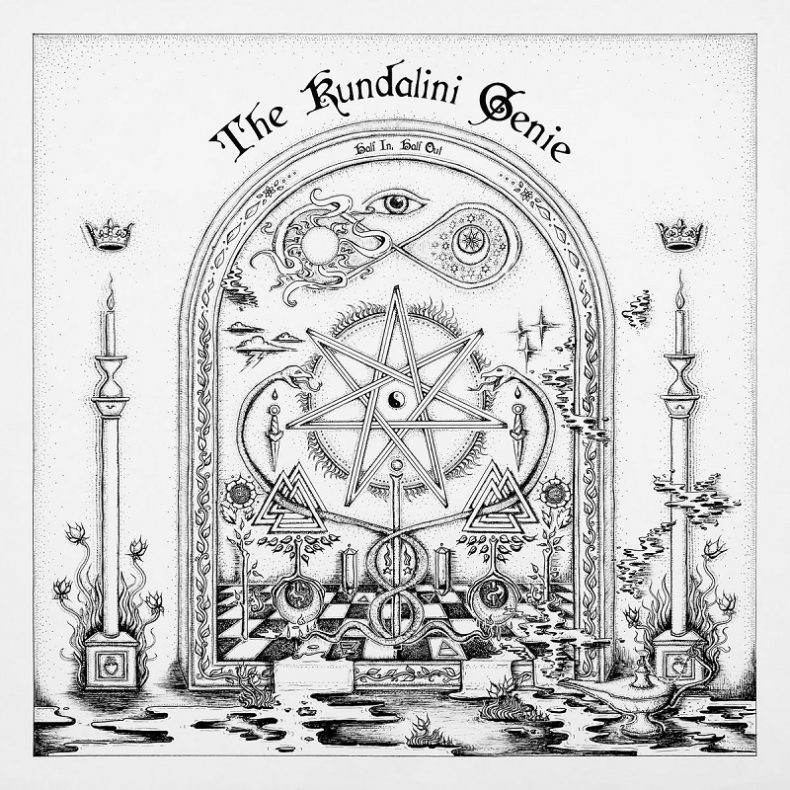 THE KUNDALINI GENIE – HALF IN, HALF OUT

Two things are equally as intriguing and today’s premiere kills these two birds with one stone, so to speak. First, what’s happening on the Scottish music scene? A lot. Of course we can’t delve into that overly much but we can highlight one of the most interesting bands to come from Caledonia in the past decade.

Second, it’s awesome to see the Vapour Trail that Mark Gardener is following with his production work in between Ride recordings and tour dates. The latest of his steadily growing collection comes by way of Scotland in a band known as The Kundalini Genie., whose new album Half In, Half Out he mastered at his OX4 Sound Studio in Oxford,

Gardener stated, “Robbie Wilson (Kundalini Genie) is a total force and a total star in the making . He’s so driven and I loved mastering his record”.

This is the fifth studio album for the Glasgow psychedelic rock’n’roll collective. Mixed by Jason Shaw (Cambodian Space Project, Frankie Teardrop, Sonic Jesus, Aerofall), this long-player feels like a welcome lovefest between The Black Angels, The Verve, Black Rebel Motorcycle Club and Spiritualized. The Asteroid No. 4 and LSD and the Search For God also come to mind.

With reverb-drenched recordings that integrate multi-textured guitars, an unwavering rhythm section and Robbie Wilson’s unique vocal style and timbre, The Kundalini Genie have a sound all their own with neo-psychedelic / shoegaze leanings. Making waves and delighting listeners, both those at home and far afoot from their native Scotland, they are cementing their place within the flourishing underground psychedelic scene.

Kundalini guitarist Louis Martin. Recently created a video for the title track, about which Robbie Wilson notes, “This song is about assholes, really. People who aren’t nice.  People who think they’re better than you, or too cool for you, or higher and mightier than you, it’s also about when those people inevitably fall short of their own high opinion of themselves and make themselves look a fool, in a nutshell,” says Robbie Wilson.

Known for their rip-roaring, trippy and charismatic performances, the band has performed with The Brian Jonestown Massacre, The Warlocks, The Underground Youth, The Myrrors, The Stevenson Ranch Davidians, Triptides, New Candys and Spindrift, in addition to ripping it up at numerous festivals.

Half In, Half Out will be released digitally, on vinyl-style CD, and on coloured 12″ vinyl with reverse board artwork. It will be available everywhere digitally, including Apple Music and Spotify, and in all formats via Bandcamp at https://the-kundalini-genie.bandcamp.com/album/half-in-half-out.