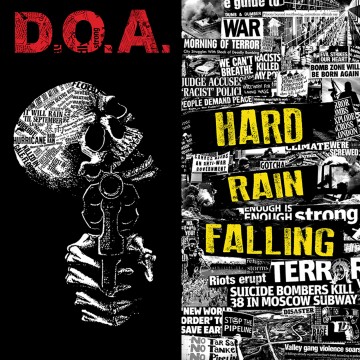 D.O.A. Is Back With A Vengeance!

It looked like Canada’s legendary punk pioneers were going to hang it up, as Joe Shithead Keithley, the godfather of “hardcore” sought political office, but that didn’t happen this time so the political world’s loss is the music world’s gain. D.O.A. has a brand new album, Hard Rain Falling, out now on Sudden Death Records and a world-wide tour in the works.

To come up with Hard Rain Falling, Joe, Paddy Duddy (drums) and Mike Maggot (bass) took inspiration from D.O.A.’s early classics: Something Better Change, Hardcore 81 and War on 45 and made the songs quick, short and right to the point. With anthems like “The Cops Shot a Kid,” “Punk Rock Hero,” “Warmonger,” “Kicked In The Teeth” and “Racism Sucks,” they take on environmental destruction, racism, street gangs and warmongers. There’s even a cover of the reggae classic “Johnny Too Bad.” Just what’s needed from what some people call Canada’s protest band.

“The way I look at it, if D.O.A. is going to be relevant in these tough times, we have to stick to our roots and really stir things up,” says Keithley, “we’re still doing our best to change this god damn old world for the better.” – Joe Shithead Keithley

The first video from the new album is “Pipeline Fever,” a funny and sarcastic look at the impending environmental disaster that will happen if oil companies manage to get their way and litter Canada and the USA with pipelines to move Canada’s “dirty oil” Bitumen.

D.O.A., the Men of action kick off their world tour this summer

SPILL NEWS strives to keep our readers up to date with news and events in the music industry. We keep you informed of the most recent information regarding new releases, tour dates, and information items about your favourite artists.
RELATED ARTICLES
D.O.A.news