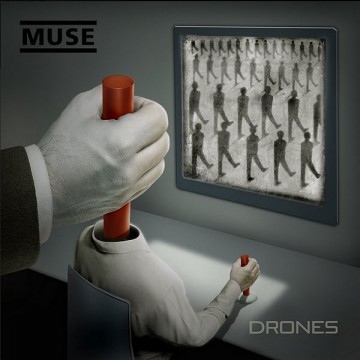 Fans of The Resistance, rejoice. For it is the same gritty, full sound of that album that one can expect from Drones. Even the theme of war is similar. If Muse’s goal was to return to their roots with this album, their goal was certainly achieved.

Listening to the album in order from beginning to end, it’s clear Muse has managed to craft a rich narrative about war and its negative characteristics in an amazingly seamless way. In true Muse fashion, the album is not just a work of art, but a bold statement that is heard loud and clear – both in the musical and political senses.

While the album serves to depict the mindlessness of modern warfare, it is not a record that should be listened to mindlessly. The integration of the signature Muse guitar, bass, and drums – heavy music – is as strong and defined as ever. And while trying to use their lyrics to convince their listeners of the downsides of war might be a bit ambitious, there’s no doubt that this collection of tracks will allow you to both think and feel.

Maya Koparkar is in her second year at McGill University, where she is currently studying International Development and Political Science. She is very passionate about social issues both international as well as close to home, and has blogged and written for various publications surrounding these sorts of topics. She is also very passionate about music and enjoys all sorts of genres and styles. You can follow her on Twitter at mkoparks.
RELATED ARTICLES
album reviewsmuse
9.0