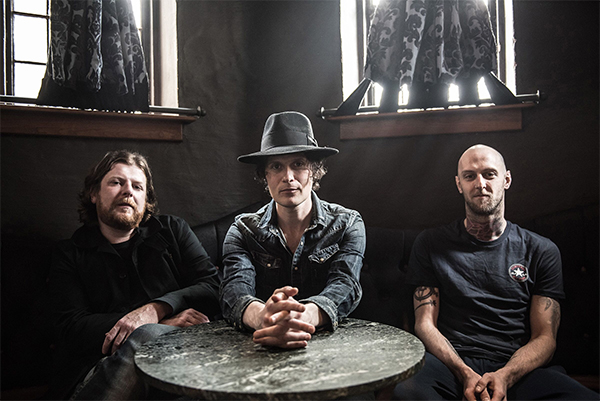 In A Flash:
An Interview With Jon Fratelli Of The Fratellis

Jon Fratelli, despite all efforts, is not a man with a plan. And for him, it’s better that way. When asked about any particular processes he uses to create the sounds of The Fratellis, he says these kinds of things will usually take care of themselves. “I avoid plans like the plague. I’m quite happy just letting things fall into place.” And fall into place they did, for the creation of the band’s latest album, Eyes Wide, Tongue Tied.

The beginning of The Fratellis was a process along the same vein. After answering each others’ “Musician Wanted” advertisements posted in a music shop in 2005, the band found themselves a record deal fairly quickly. There were no musical inspirations or guidelines they felt they needed to stick to when finding their sound as a band either. “All three of us came from different musical backgrounds, which is still true to this day,” Fratelli explains. “We just tried to write something that would suit all of us to play. Our first album seemed to be an exercise in writing songs that we could play live and would suit the places we came from. I can’t say there was one particular artist who we all identified with, apart from maybe Michael Jackson,” Fratelli says with a laugh. This sort of creative process, deeply rooted in gut feelings and self-awareness, is one the band still goes by to this day. “We write with everyone else in mind, and knowing what we can and can’t do. It doesn’t need to be constrained, but there is no point in being someone we’re not.” Fratelli tells me their process is quick – in fact, it took about three to four weeks for the entirety of Eyes Wide, Tongue Tied to be recorded.

Quickness is something deeply rooted in The Fratellis’ artistry. At the very base level of it, Jon sees inspiration as fleeting. “It’s no more than three or four seconds long,” he says. “It’s a flash. You make a record of, let’s say, 16 songs; that’s 16 three-second flashes. It’s not a lot, but it’s enough to make it worth being alive for.” This philosophy has manifested in “Slow,” Fratelli’s favourite track of the album. Fratelli describes it as being written without any real effort or intention. “You wake up one morning and it’s not real,” he explains. “But by lunchtime, you’ve recorded it, and the final recorded version is almost identical that first little flash of inspiration.” A little flash of inspiration is also what one can attribute to the title of the album itself. Eyes Wide, Tongue Tied was a line in a song that was initially recorded, but never actually ended up making it onto the album. However, Jon also acknowledges there is a deeper meaning behind it. “It’s not meant to convey any specific meaning, but instead, speaks for itself. It tells a story without having to tell the story.”

The album, on the whole, tells a story in its own way. Rather than creating an album with a particular theme, the goal was just to create an album that held together sonically. Fratelli attributes much of this album’s success to its producer, Tony Hoffer. “Tony was our first ever producer. There’s something in the work that he does that suits the band. It’s pointless trying to claim that our sound is ours. We just try and make records that you would want to listen to. With Tony, we can trust him to make something that is going to be interesting and will stand being listened to three times.” Jon acknowledges that this is no easy feat, but that taking yourself out of the equation brings a certain amount of pleasure. “It’s a nice place to be, when you have the investment in it. With Tony on board, you can relax, because you know you can make a record that you would want to listen to.”

When it comes to planning for the future, Fratelli, ever so consistent, says he has no idea what the future holds. “This could be us finished. It’s completely song dependent. If you start to get the feeling of a new song, it’s completely unstoppable. It can happen tomorrow, or not. I’ve long stopped planning any of it. It’s a complete lie to think that you have any control over any of it, but it’s a nice moment when it happens.”

The Fratellis are set to kick off their latest tour, with their first show in Toronto on September 16. Starting in Toronto was a wise choice for them logistically, but Toronto also holds a special place in their hearts. “We’ve never really had a bad show in Toronto. It’s always one of those things where we’ll come off afterwards and no one even needs to talk about how it was one of the good ones.” From there they will cover a lot of ground, touring across a bit of North America, the UK, Europe, Japan and Indonesia. Fratelli considers them lucky to have the opportunity. “It’s the one thing we’ve always wanted to do, and we literally can’t do anything else. We’re pretty much unemployable in every other way.”

Maya Koparkar is in her second year at McGill University, where she is currently studying International Development and Political Science. She is very passionate about social issues both international as well as close to home, and has blogged and written for various publications surrounding these sorts of topics. She is also very passionate about music and enjoys all sorts of genres and styles. You can follow her on Twitter at mkoparks.
RELATED ARTICLES
eyes wide tongue tiedfeaturesfratellis
8.0