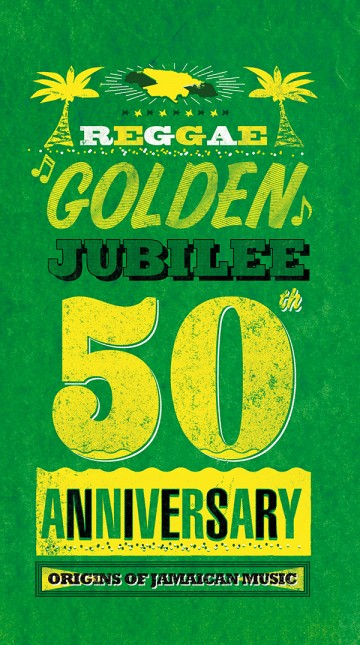 Edward Seaga, former producer and Jamaican Prime Minister, “hand picked 100 of the most significant songs to emerge from the country to celebrate the island’s half-century turn of liberation.” Attempting to pare down 50 years of music into a four disc set is no easy feat, and for the most part Reggae Golden Jubilee is successful at doing exactly that.

The first disc doesn’t leave anything out taking you on a journey from the late ’50s Boogie/Rock/Rhythm and Blues, through early ’60s Ska, late ’60s Rocksteady and early Reggae, all the way to early ’70s Dub, Deejay and Reggae. The story behind a feud fought using witty lyrics in Prince Buster’s “Black Head Chinaman” and Derrick Morgan’s “Blazing Fire” is especially interesting to read in the liner notes while listening.

The second disc is equally strong starting with U-Roy’s toasting and his different type of Dub and DJ that was influential in the development of future Hip-Hop and Rap in North America. Most of the ’70s Reggae is featured here with the omission of The Congos and Horace Andy. I also expected more acknowledgment of Lee Perry’s influence on the sound of Dub and the Reggae “riddim” in Jamaican Pop.

Disc three moves into ’80s DJ and Dancehall where R&B, Lover’s Rock and the digital Raggamuffin styles can be heard. Maxi Priest’s cover of Cat Stevens’ “Wild World” is an odd choice considering he was not born a Jamaican.

The forth disc expands it’s range to include culturally relevant hybrids of Dancehall adding Hip-Hop, Pop and R&B styles.

With so many Reggae box sets and compilations out there this collection is unique with it’s inclusion of a 64-page booklet written by Seaga to accompany the music. The booklet provides explanation for the tracks chosen in how they shaped Jamaican music and made it popular, influential and accessible world wide. I am not a fan of the DJ and Dancehall styles, especially songs that have little or no Reggae sound. Reading the background stories behind the artists and their music made the third and forth discs more listenable. If you want a thorough history of Jamaican music, Reggae Golden Jubilee is a must have collection. I would have been satisfied with more of the early Jamaican music that influenced today’s Reggae and Ska.