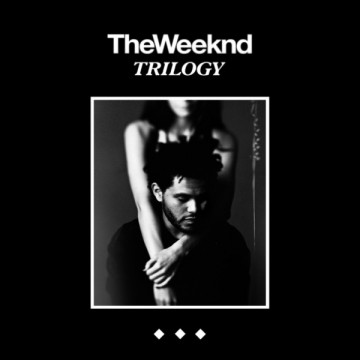 This long awaited three-disc (160 minute) compilation album is one pristine piece of work and a hell of an album. Trilogy is TheWeeknd’s first release with a major label. Mixtapes; House of Balloons, Thursday, and Echoes of Silence, are remastered, reworked and re-released with Republic Records after TheWeeknd signed with them in September, 2012.

This Canadian recording artist was a nobody in Toronto two years ago, but he (Abel Tesfaye) has built his name up along with his talents and he’s now one of today’s most influential artists. He did that with three free mixtapes released online. Trilogy showcases TheWeeknd’s fierce and smooth side of his voice, more sexy and lifting than his raw online content.

Trilogy starts with “High For This,” a softer but deep song where Tesfaye’s vague yet open with what his lyrics, but the tempo and melody remains very serene and relaxed. A great intro to the album as it gives an open and free feeling while setting a tone. The Weeknd deals with a darker side of his life on the track “Wicked Games” where he talks about drugs, sex, lust and pain. Trilogy focuses on these subjects and tales of immorality, love and overcoming situations. “Valerie,” (Disc 2) is an intimate and personal track and a highlight from the entire collection. “Next,” (Disc 3) is a vulnerable track, yet so entrancing.

Slinky sounds, sultry elegance, slow pianos, echoes, raw and aggressive, all of this is found on Trilogy. This is a versatile album and hard to get bored of. Each track is so individual and different. Trilogy is a mark in the music industry that won’t be forgotten. The Weeknd had us on the edge of our seats waiting for Trilogy, now he’s got us begging for more.

The Spill Magazine is a Toronto-based online publication dedicated to covering the independent music scene with a strong focus on our thriving hometown talent. Our writers bring you up-to-date news, in-depth features on musicians and reviews for the latest CD releases. We also travel to the front lines for all local festivals including Canadian Music Week and North by Northeast. Don’t forget to check out our Facebook and Twitter pages for all daily Spill updates.
RELATED ARTICLES
album reviewsthe weeknd