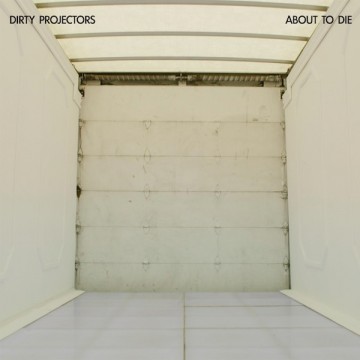 The Dirty Projectors
About to Die
Domino

The Dirty Projectors have, in their decade of existence, established themselves as a strange brand of Art-pop, the element of Pop being the conduit separating them from being yet another deep-dark-Prog-Rock band. It’s the same element that separated David Byrne – a recent collaborator – from Morrisey.

As in the past, the entire EP rides exclusively on the sporadic – sporadic melodies, sporadic instrumentation or lack thereof, sporadic lyrics.

But on their new EP, About To Die, within the iconic mess there are classic, deeply rooted Pop influences more boldly present than I’ve come to expect from frontman and writer David Longstreth. Tracks three and four are unmistakably Zeppelin in a number of respects, primarily percussive and vocal. Track three, “Here ‘til it Says I’m Not” features the ghost of John Bonham himself with every fill. Track four, “Simple Request,” features David Longstreth channeling the seven-to-eleven Robert Plant of ’71 in his own yipping sort of way.

My primary disappointment in this EP relies on Longstreth’s minimal use of the Dirty Projectors. That is to say, the band. The band is capable of wild diversity and while capturing that trait in only four songs may be an improbably venture, it might have been more worthwhile. The best example is track two, “While You’re Here.” Why Longstreth chose to employ a string quartet over the far more interesting and equally able voices of his bandmates – who seem both literally and metaphorically buried in the mix throughout – is beyond me. You can’t say anything bad about the strings, but you really can’t say much in general about the strings. They’re just strings, just there, just doing their job. There’s not a whole lot to examine or get lost in, which – when considering the precedent set by most of their catalogue – is saying something.

It would be illogical of me to want a band like Dirty Projectors to always sound the same, because that’s not what they’re about. But if you’re going to back off of a key part of your sound – namely the voices of Olga Bell, Haley Dekle and Amber Coffman – for the sake of varying your effect, pay close attention to what you might be losing. Different isn’t always as interesting.

About to Die is composed of four tracks, three of which were B-Sides off of the following release, Swing Lo Magellan. Considering their priority in the Swing Lo Magellan sessions, I won’t make any doomsday predictions or let myself sigh regarding the next record just yet. The Dirty Projectors could go either way.