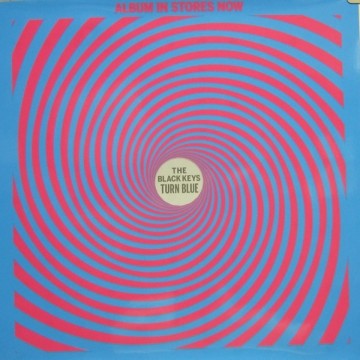 What would happen if Pink Floyd tried to make a blues record? Thanks to The Black Keys and their latest release, Turn Blue, listeners can now imagine such an album. The hard rocking duo have dialed back the bluesy influence of past albums and instead fully embraced the psychedelic sounds that were so popular with the Woodstock generation. The result is a Black Keys album that really doesn’t sound much like a Black Keys album. It’s a gamble that has paid off greatly for Dan Auerbach and Patrick Carney. Rather then feeling safe with the success of 2011’s El Camino and following it up with El Camino 2.0, the duo have thrown caution to the wind and created a brand new listening experience for longtime fans of the band. While Turn Blue marks the fourth collaboration between The Black Keys and producer/songwriter Danger Mouse, his influence on the album is perhaps more overtly felt on this record. The title track “Turn Blue” sounds almost as if it was a leftover track from Broken Bells’ After the Disco. Just replace James Mercer’s haunting vocals with the barroom antics of Auerbach. It’s these contrasting styles of blues, psychedelic and garage rock that help make Turn Blue such a memorable album. Like most great bands, The Black Keys continue to evolve and grow with each album. Each one is a definitive capsule of everything that is The Black Keys in that particular moment. With that in mind, we have no idea what the next album will sound like, but it’s impossible to not be excited to hear what comes next.

Photographer by choice, writer by necessity. Since moving to Toronto in 2011 Morgan has become an active member of Toronto’s music scene. On any given night he can be found at various venues with his camera in hand. There’s nothing he loves more than exploring all the venues this wonderful city has to offer, discovering new bands and genres along the way.
RELATED ARTICLES
album reviewsthe black keys
9.0