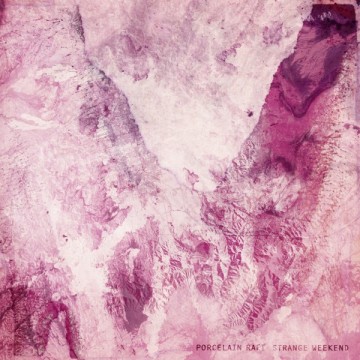 In the midst of the all the business and action of the city, Mauro Remiddi , finds himself recording Strange Weekend in a New York basement, bringing ambient sounds and haunting vocals that you can get lost in. The Rome-born, London-based former member of Sunny Day Sets Fire releases his debut LP under the name Porcelain Raft.

After the previous releases of a couple of his EPs (Fountain’s Head, Strange Weekend) we finally get the full view, rather than a glimpse, of what Porcelain Raft is all about. The album has a certain aesthetic to it: soft, drifting melodies, ambient synths and Remiddi’s voice that seems to perfectly blend into every sound that backs him up as he sings. Home studio recordings are always risky, and it seems that it might not have been the best idea for Strange Weekend. On tracks such as “Is It Too Deep For You” and “Put Me To Sleep,” Remiddi’s vocals tend to be over-powered by the rhythm in the background. Although his voice matches the mood he wants to set with the synth, the two blend too well, losing the prominence that the vocals should carry. However, the closing tracks on Strange Weekend, “Picture” and “The Way In,” are more upbeat as acoustic guitar riffs accompany Remiddi’s vocals, giving the album a completely different sound and feel.

Perhaps the isolation endured in the New York apartment gave Remiddi the need to create something extremely transcendent, but it resulted in an LP that seems too mechanized and too forgettable for a debut.