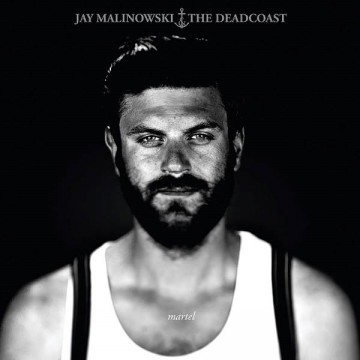 I was really excited when I heard that Jay Malinowski, the singer-songwriter and Bedouin Soundclash frontman, was releasing new music after listening to his latest project, Martel by Jay Malinowski & The Deadcoast. After listening to it dozens of times, I am still just as excited. Martel’s 18 songs are divided into two hemispheres, the Pacific and the Atlantic, and together they make up a rich, captivating concept album filled with emotional history and stories of love, loss, death and despair.

Martel takes you on an adventure that offers a taste of such disparate sounds as California pop, New Orleans jazz, Spanish flamenco, Louisiana Cajun, Old World classical, Maritime shanties, ragtime piano and vaudeville. Malinowski’s warm voice brings all these different sounds together as he acts as our guide on this beautiful (sometimes upbeat but mostly dark) journey through his Huguenot ancestor Charles Martel’s history, as well as his own search for answers.

Whether you’re drawn to music or lyrics, you’ll find something you love in Martel. Malinowski’s piano sets the mood for many songs, and the strings from Vancouver-based trio The End Tree, who collaborated with Malinowski to form Jay Malinowski & The Deadcoast, are creative and intriguing. Malinowski’s songwriting is powerful and creates beautiful images, strong characters and compelling stories that sweep you away.

The haunting opening track, “Main-A-Dieu”, immediately draws us in with tolling bells, poetic spoken word and a feeling of waves washing over you. From here, it’s an adventure that just gets better with every listen, as each song on the album corresponds to a point on the map. The album closes with the beautiful, piano-driven “Low, Low, Low” that tells us a bit about how Malinowski got here. “In this world I learned to bare my teeth and grin,” he sings. “I like to think where it goes ain’t where it’s been.”

You’ll want to settle into a comfortable spot and spend a lot of time with Martel. This is not background music; this is music that deserves to be savoured, as Malinowski invites you to share his journey, and at different times to dance, sing along or just close your eyes and listen.

The Martel experience doesn’t end after the final notes of “Low, Low, Low”. Malinowski will release a novella companion to the album, Skulls & Bones (Letters From A Sailor To A Long Lost Granddaughter.