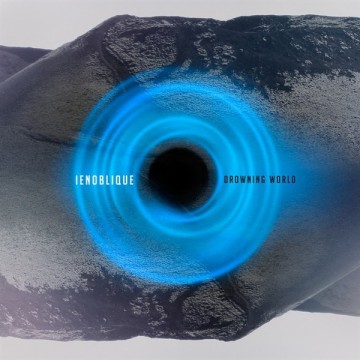 Drowning World, the debut album by musical trio Ien Oblique, is an 11-track album of well-crafted dark Electro-pop tracks that are reminiscent of the mid-’80s New Wave sounds that shaped the sound of the 1980’s with a bit of Trance mixed in for good measure. The main difference is the use of modern sound creation technology and dense, slick production values. The trio knows how to create a soundscape that is both driving and hypnotizing while also being quite catchy. The order of the tracks on this album creates an overall flow and mood that that make listener want to refrain from skipping ahead. While their sound is not completely original, the album definitely makes for a pleasurable listen.

The members of Ien Oblique (Jared Lambert, Juan Espinosa and Bryant Griffin) have crafted an album that is filled with layers of well-programmed synthesizers, punchy rhythms, and vocal melodies that most people will find appealing. The vocals will surely remind you of early-to-mid Depeche Mode. Lambert’s vocals are strong and skillful but the engineering doesn’t quite match the production quality of the music that surrounds them. It’s obvious that the band worked hard to blend the vocals with the synthetic textures of the music and they mostly hit the mark but there are times where they sound a bit dry and under-produced. I am a bit of a stickler when it comes to vocal production, so this is only a minor quibble when considering the outstanding production of the work as a whole and many listeners may not share my critique.

Standout tracks are “Change the Words,” “Slaves Of Pleasure” and the title track, “Drowning World.” All three songs have an energy that is infectious and will motivate almost everyone in the club to leave their drinks at the bar and hit the floor. My personal favorite is “Change the Words” due to the outstanding drum programming, strong vocal melody and very tasteful production. I also like the slightly slower BPM of the track, differentiating it from other straight club tracks, making it an excellent listen at home or in the car as well.

If you are fan of the darker side of Electro-pop, I recommend giving this a listen.