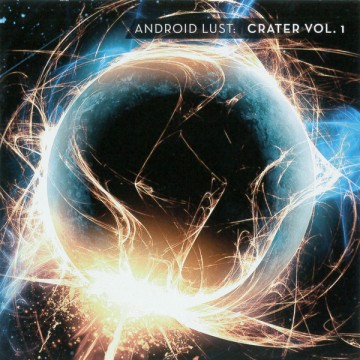 Funded entirely by a Kickstarter campaign, Android Lust’s newest album, Crater Vol. 1, already demonstrates that the US-based Electro-Industrial artist has a dedicated fan base. Crater Vol. 1 comes on the heels of earlier successes The Dividing (2003) and The Human Animal (2010).

Upon first listen it’s easy to mistake Crater Vol. 1 for a soundtrack, as the decidedly post-apocalyptic, unsettling sounds feel like background music for a sci-fi film or a video game. Decidedly lacking in vocals on most of the tracks, the narrative is told mostly through low-fi electronics and ambient instrumentals.

Tracks that exemplify this combination best are “Vereor” and “Yaakuntik,” and while they can easily blend into others such as “Precipice,” they manage to stand alone as they take unexpected twists and stylistic turns. The three tracks which boast vocals, “I Need to Know,” “From The Other Side,” and “Here and Now,” lend a sense of structure to what is otherwise a somewhat abstract, ambient album. It is definitely a requirement to listen to the album the whole way through as the overall feel requires the momentum of several songs to begin to take hold.

If the title of the record is to be taken at face value, Crater Vol. 1 marks the series of albums to come from Android Lust which will continue to explore and develop her dark, Electronic sounds.

Alyson is a writer, content marketer and social media manager in Winnipeg, Manitoba. She holds a Bachelor of Arts in Rhetoric & Communications from the University of Winnipeg and runs her own business providing businesses and individuals with copyrighting services, and content marketing strategies and management. When not online she can be found gardening, riding her bike or sipping fancy coffee.
RELATED ARTICLES
album reviewsandroid lust
8.0