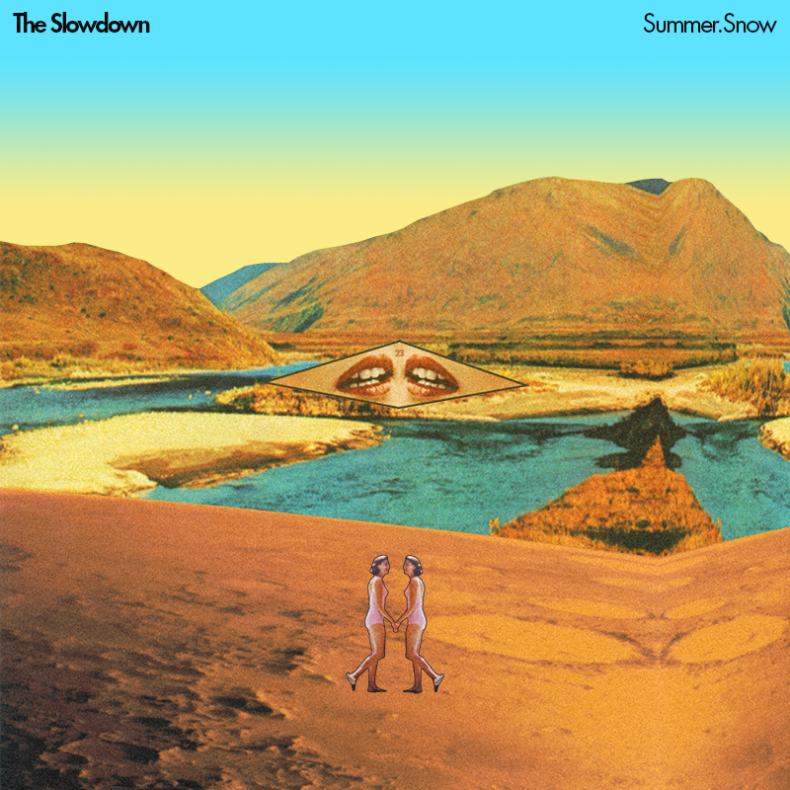 The Slowdown’s 2017 release, Summer Snow, finds the band in a matured headspace filled with heavy contemplation and dark premonition. The opening track “You Gave Me Life” sets the tone for the third Slowdown album, dripping with neo-western dystopic vibe. Sam Hoskins’ rich baritone croons over a smooth and brooding groove, conjuring images of dream-like horseback riding on the blood red surface of Mars. Upbeat yet melancholy, “Let’s Go” reveals a story of blame, resentment, lost love and divorce. The lush wide keyboards, driving guitars and cavernous background vocals of “Happy Gun” present a darkly vivid apocalyptic Mad Max-like landscape. The album picks up midway with the strong and dense rocker “Experiments at Home,” filled with infectious guitar riffs and a steady downbeat. The lyrics “Ever get the feeling in sleep that you have been running?” reveal the paranoia and unrest of Summer Snow. “Life of a Ghost” begins with an ominous sample from the Woody Allen movie “Manhattan” before segueing into a spaghetti western guitar intro for full-on new age cinematic cowboy psychedelia.

The lyrics “To feel someone at your side, only to sleep alone tonight” begins Summer Snow’s somber yet glorious finale. Two tracks, “Look Older” and “Wait to See it Over,” are seamlessly conjoined as a beautiful heart-wrenching call toward the acceptance of our unavoidable sufferings.

While the third Slowdown album Summer Snow is not exactly the soundtrack for your next house party, it is a challenging and engaging album meant to be heard as a whole. Summer Snow is an honest and heavy-hearted portrayal of the continual and inevitable struggle, amidst the unpredictable and unmerciful environment, to hold on to the happiness and wonder of life.

“‘Happy Gun’ speaks to the notion that our leaders have turned us into something we are not. Maybe our nature isn’t really to be at war with each other but we have been made to believe that by our greedy leaders.”

by SPILL NEW MUSIC on January 6, 2022
DAYGLO ABORTIONS – “RAISED ON CHEST MILK” A SPILL EXCLUSIVE MUSIC PREMIERE This album is dedicated to the people that helped us make it. Scott Bennet and [...]