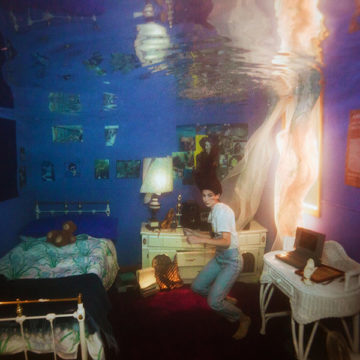 Natalie Mering, aka Weyes Blood, makes time stand still. She doesn’t wave a magic wand or play distortion tricks with strobe lights. She emotes, and time stops for her. Titanic Rising, her fourth full-length LP, is not an album that wallows in or trades on misery for suicide feels, a style of music that can often feel like a crutch for many talented singer-songwriters. Mering nods toward the darkness, but her music envelops listeners within a free-floating sanctuary. It’s okay to feel. It’s okay to be afraid or angry – but none of that matters, not right now. Not, at least, for the next 42 minutes.

“Let me change my words / show me where it hurts” she sings on “A Lot’s Gonna Change,” an opening track that recalls Janis Ian’s beautifully painful “Society’s Child.” A cloud of despair followed Janis Ian (a transcendent, purposeful songwriter), whereas Mering sings as if to part the clouds. The sun streams through on the flouncy, piano-fueled “Everyday,” a song that might feel saccharine in direct contrast to the first two tracks if not for the dirge-like opening and the layered mezzo consistency. Mering effortlessly changes tempo and pitch; it would be easy to overlook the complexity. Focus on her nimble shifts during “Something to Believe.”

“This is how it feels to be in love/
This is life from above/
There’s no books anymore/
I’m bound to that summer/
Big box office hit/
Making love to a counterfeit.”

The soundtrack to soaring through a 16-bit sky. Strings and a driving backbeat emerge, ascending higher. You will stop what you’re doing. You will feel something as “Movies” draws to a resonant climax. Your heart just grew three sizes.

There’s an expectation that individual records will tell us how to feel or at least open a window into the artist’s specific perspective, but Weyes Blood sidesteps almost every opportunity for anchor or punctuation. Nothing on Titanic Rising approximates “Used to Be” from 2016’s Front Row Seat to Earth, which offered a definitive road sign in the form of a melodic, radio-ready hook. Your connection to the elusive (perhaps invasive?) Titanic Rising might rest on your willingness to wipe the slate clean after each successive emotional volley. Only on “Andromeda” does the album provide grounding, but even this feels like relative misdirection when the artist maintains such confident control on the switchboard.

Weyes Blood concludes Titanic with an instrumental, “Nearer To Thee,” one of two such interludes (the other being the title track). Cello-forward strings play the album out, silence once again ushering in the outside world – the only cure, another rotation, another turn in Natalie Mering’s sanctuary.

James David Patrick has a B.A. in film studies from Emory University, an M.F.A in Creative Writing from the University of Southern Maine, and an honorary Ph.D. in bullshitting about everything else from the College of Two Pints. His fiction and non-fiction has appeared in PANK, Monkeybicycle, Squalorly, Specter Lit, and Bartleby Snopes among other wordy magazines. While he does not like to brag (much), he has interviewed Tom Hanks and is pretty sure you haven't. He bl-gs about music, movies, and nostalgia at thirtyhertzrumble.com and runs the James Bond Social Media Project at thejamesbondsocialmediaproject.com. James lives in Pittsburgh, PA.
RELATED ARTICLES
album reviewalbum reviewsmovies
8.0