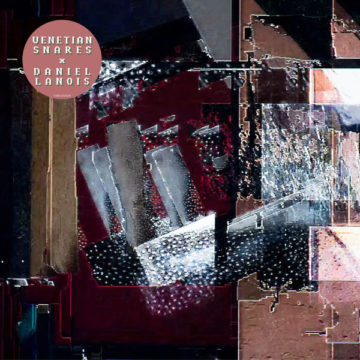 In 1982 I first met a young record producer named Daniel Lanois at his Grant Avenue Recording Studio in Hamilton, Ontario. At the time he was co-producing, along with Mark Gane and Martha Johnson of Martha and the Muffins, a band I managed, and that his younger sister Jocelyne had just joined as their new bass player on their third album, This is the Ice Age (Virgin Records).

At that time, Dan mentioned that he was also working at his studio on an experimental electronic record with well-known producer/keyboardist Brian Eno, whose music history included a stint on Roxy Music’s first two albums. The experimental music from the album he was then working on, titled Apollo: Atmosphere and Soundtracks (EG Records), went on to be used in the classic later films Traffic and Trainspotting.

This new album by Lanois and Winnipeg electronica musician Venetian Snares (Aaron Funk) brings back memories of that time and that record, as it’s not so much of an album of songs per se, but rather a collection of FXs and sounds, produced with song titles like “MAG 11 P82, United P92” and “OPHELIUS 1st P118.” From those titles, you get an inkling that this is not your typical mainstream album. Funk’s signature style of music uses eclectic samples and odd time signatures, along with complex melodies.

The project originally took shape in 2014 when Lanois reached out to Venetian Snares, and in 2016 Funk hung around Toronto between shows and recorded the album with Lanois in a former Buddhist Temple in Toronto.

The album Venetian Snares X Daniel Lanois indeed travels to new zones in what Lanois describes as “a body of work driven by exploration.” With Funk laying the groundwork with his drum sounds and Lanois riding the pedal steel, they weave their songs and sounds together in a new kind of sonic tapestry.

Gerry Young is President of Current Records and Management, and author of the 2011 biography Pop Goes The Weasel: Rock And Roll Off The Record, available at Indigo/Chapters, Barnes & Noble, and Amazon.com. He has recorded and managed Juno Award winning bands Martha And The Muffins and The Parachute Club among others.
RELATED ARTICLES
album reviewsdaniel lanois
8.0