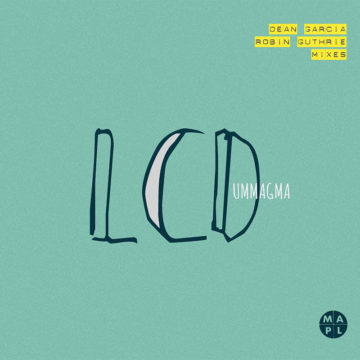 Ummagma is a duo based in Canada. The members are Canadian Shauna McLarnon (vocals) and Ukrainian born Alexander Kretov (instruments). The band have been releasing records since 2012, and have quite a discography (three albums and, including LCD, four E.P.s.). LCD is their most recent release and contains both new and old, although the old is remixed significantly.

Also on this release they have worked with two legends in their ‘ambient/dream pop’ music. Robin Guthrie (formerly of  Cocteau Twins) and Dean Garcia (Curve). Both take their turn at remixing a song by Ummagma and in Garcia’s case, two songs.

The result is a tight, cohesive, beautiful E.P. The remixes work, and they have chosen wisely to have these two artists, who are also influences to remix Ummagma. The fit is perfect. The music is dreamy, perfect ambient based pop music. The music transports you into other worlds and dimensions and it works best when it is the only thing you are focusing on. LCD has a flow to it which makes it sound like a complete piece, even though some songs date back five years

Although the songs are great and the E.P. flows extremely well, the main problem with the E.P. is the lack of new material. LCD is a bit of a tease and a reminder of how great these two can sound. To their credit, the remixes make the songs sound fresh and new, especially Garcia’s remix of “Back To You”, but I would of liked these remixes to bonus cuts on an e.p of new material. The new song, “LCD” is a clear highlight and one can only imagine what these two are cooking up in terms of a new album.

Born and raised in Whitby, Aaron discovered music through his love of The Beatles. This led to a career in radio, writing for various publications, and ultimately a radio show about The Beatles (Beatles Universe), which ran for over four years. When not immersed in music, Aaron enjoys spending time with the loves of his life -- his wife Andrea, and daughters Emily and Linda (all of whom have an intense love of music too).
RELATED ARTICLES
album reviewslabel obscurashauna mclarnon
8.0