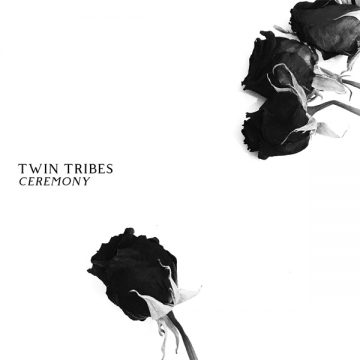 I hate to admit it but I’m an old goth; not the goth part but the old part. Listening to Ceremony, the new album from Texas goth/dark wave duo Twin Tribes, caused me to have severe flashbacks to a time when Cleopatra Records ruled the goth scene in the early to mid ‘90s, and bands like Rosetta Stone, Big Electric Cat and Switchblade Symphony ruled their roster. Gothic and dark wave were revitalized, and exciting again. That is what I am seeing now, and one of the bands in the forefront here is Twin Tribes.

Growing from their brilliant debut album, 2018’s Shadows, this album is 36 minutes of pure shadowy bliss. They’ve come into their own skin it seems. Maybe the fact that they co-produced this along with returning producer, Allen Michael, or that the overall tone of the album seems more, well, goth instead of the ‘80s sound of the first album.

Three singles have been released so far. Lead single “Heart & Feathers” set the tone with a brilliant, danceable beat, and brooding vocal. The follow up, “Fantasmas”, has echoes of The Cure’s early albums. The pièce de résistance though, is the latest, “The River”. It is a masterfully-crafted song with a memorable chorus to chant along with and some witchy undertones (“Throw the sage in the fire…”) to keep it real.

The remaining tracks are equally as amazing but I’m sure they can’t release everything as a single, can they? Album opener, “Exilio” is a slow burner and great lead in. Later, “Avalon” throws the drum machine into full throttle for the chorus and another earworm melody that will stay with you. “Upir”, which is Russian/Slavic for vampire, features wonderfully simple structure and short but sweet lyrics alluding to the song’s main attraction (“No reflection, only your lies”). Closing track “Shrine” is a gorgeous love song. Yeah, you heard me.

The sounds of the classic goth/dark wave/cold wave bands are back indeed, and Twin Tribes are sounding the call. This album is nothing short of brilliant. Go get yourself some absinthe, a comfy chair and some headphones, then blast this record as loud as you can. It’s one of the best ways to close out 2019.

Michael Mitchell's love of music started at an early age and slowly became an addiction that courses through his veins to this very day. It is guaranteed that if you are in his proximity, he will try to get you to travel to the nearest record store and make you buy beyond your means. His wife and two children acknowledge his problem and continue to encourage him into rehab. He currently writes for Torched, Stereo Embers, God is in the TV, ReGen and Spill magazines.
RELATED ARTICLES
album reviewalbum reviewsceremony
8.0