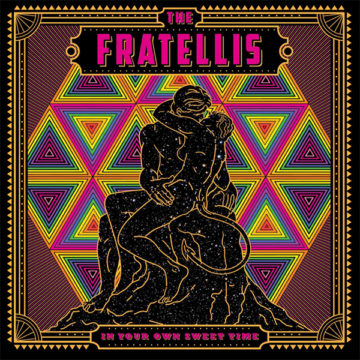 The Fratellis
In Your Own Sweet Time
Cooking Vinyl

It makes you shake your hips and loosen up almost instantly. The Fratellis fifth studio album is completely different from their last Americana-inspired one.  Glitzier and scattered with pop over their traditionally indie sound, In Your Own Sweet Time is an album masterfully crafted by lead singer Jon Fratelli, but brought to life by the entire band and long-time producer Tony Hoffer.

Featuring a significant array of instruments, including a huge string section at times, the entire album has an ease and playfulness to it no better seen than on tracks like “Starcrossed Losers”. Written almost entirely using computer software, the technique represents a significant though unintentional shift for the band, whose songs usually come together with lyrics first sans major technology.

Still, the album is more than bubble gum pop and unicorns.  With clever turns of phrase and lyrics that lean slightly darker at rare points throughout the album (“Have you seen my solid ground?”), the album simply reflects a life that is “peachy” according to Fratelli. With a theme running through out about not taking things too seriously, it’s easy to see why the album is already beloved by many.

Perhaps the climax of the album, “Indestructible” is an unforgettable track combining worldly sounds, dark and sultry vocals reminiscent of Mike, and sound a bit more 1960s than ‘80s like the rest of the album. Following a girl, the lyrics describe a fierce woman gliding through life. “When she calls your name you fall to your knees!”

Finally, closing out the album is a slowed-down tune called “I Am That”. The middle of this song peppers in a brilliant piano-violin duet that is matched with simplistic drums slowly. Building up to a final crescendo, the song explodes before being paired back to simple, stunning, word-less vocals. The song is filtered with many layers of all instruments and vocals, easily and smoothly creating a simply stunning end to this album.

Gabrielle Mueller is a lover of all things music, writing and charcuterie boards. Gabrielle has a particular passion for music of the 1960s and the hippie movement in Toronto’s Yorkville district. Gabrielle runs her own music website, The Hippie Historian, where she reviews concerts, interviews musicians and writes about music history that spans the ages.
RELATED ARTICLES
album reviewscooking vinylcooking vinyl records
9.0