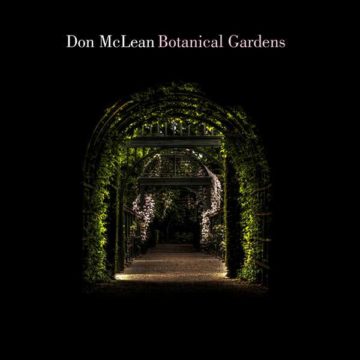 One never knows what Don McLean will do next or when, for that matter. Botanical Gardens is his first studio album since 2009’s Addicted To Black. So it has been a while for McLean but it has been well worth the wait. It is also his 21st album, and the man keeps on finding new things to sing about, and new ways in which to express himself.  A true artist.

“I’ll leave you the noise, and the dark city canyons.”, and the album and title track, “Botanical Gardens” have begun. Opening with a standard rock sound, not noisy, but loud, which is an interesting juxtaposition with the subject material of the song. The song, and the album, are a look inwards. This seems to be the overall theme of the album. McLean may look inwards, but the theme and mini themes of this album are universal. Love, relationships, mortality, peace, a troubled world, all get their turns in this garden, and he comes at each topic with typical McLean honesty, wit and humility.

He does not have the answers but he does have the questions and the issues to be addressed. Not every song is a manifesto, some are just fun country/rock songs (“Rock ‘n’ Roll Your Baby”) while others are somewhat painful, yet paired with a relatively happy bluesy melody (“I’ve Cried All The Tears I Have”) . There is a lot going on in his Botanical Gardens.

“Grief and Hope” is a wonderful song that one could imagine Hank Williams writing had he lived. Well structured, melodic and brilliant lyrics. That is the thing with this album, he writes so incredibly well that the listener almost takes the songs for granted.

“When July Comes” is a highlight of the album, a painfully personal song, that is done in the best McLean style, and is the one song that harkens back to his singer/songwriter past. It is a haunting, piano based song with a wonderful string arrangement and I think the best vocals McLean has ever performed.

Some of the songs found on this album have been around for a while. He has performed some during his last few tours, but here they sound fresh, and he breathes such life into them that all the songs sound custom made for this release.

The album finishes with a beautiful cover of a song made famous by Sinatra, “Last Night When We Were Young”, a beautiful, melancholy song, reflecting on life, age and companionship. It is a beautiful way to end the album and a beautiful bookend with “Botanical Gardens”.

Botanical Gardens is a brilliant album. With McLean embarking on a tour to promote the album, one can only hope that it is not another eight years for a new album from him. In the meantime, there is a lot on this album to enjoy and dig into.

Born and raised in Whitby, Aaron discovered music through his love of The Beatles. This led to a career in radio, writing for various publications, and ultimately a radio show about The Beatles (Beatles Universe), which ran for over four years. When not immersed in music, Aaron enjoys spending time with the loves of his life -- his wife Andrea, and daughters Emily and Linda (all of whom have an intense love of music too).
RELATED ARTICLES
album reviewsbmgbotanical gardens
8.0