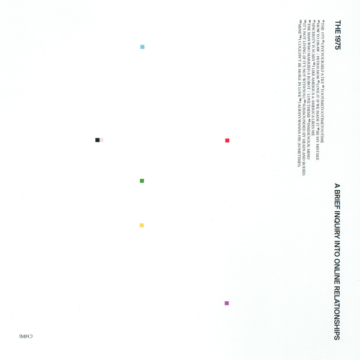 The 1975
A Brief Inquiry Into Online Relationships
Dirty Hit

Manchester-based band The 1975 has released their impressive third studio album, A Brief Inquiry Into Online Relationships. The band formed during their high school years and went on to make a name for themselves after releasing four EPs and two studio albums. Contrary to their prior storytelling messages, A Brief Inquiry Into Online Relationships gives us frontman Matty Healy’s take on society’s biggest problems: politics and technology. Nevertheless, Healy continues to express his darkest moments.

This album is a complete rollercoaster of genres. It starts off with the traditional 1975 introductory track, then delves into a world of bubblegum pop, jazz, and stripped-down ballads.

A few songs stand out from the rest. “Love It If We Made It” brings problems with the current political climate to light. It features a repetitive chorus that offers an optimistic outlook on our society’s future. The soft, acoustic ballad “Be My Mistake” provides a heartbreaking look into Healy’s loneliest moments. You can hear the emotion from the vulnerable lyrics all the way to the cracks in his voice. “The Man Who Married A Robot” is a Siri voice telling a story of a lonely man who turned to the internet. It speaks on modern day addiction to technology, but also on how it can be helpful. The introspective closing song, “I Always Wanna Die (Sometimes),” is a beautiful, yet dark masterpiece. The instrumentation of this song sounds triumphant but the lyrics are heavy. Healy sings about the difficulties that come with getting through each day.

Overall, A Brief Inquiry Into Online Relationships is an exceptional album that touches on many important topics. Not only does it tie in nicely with their other albums, it demonstrates their growth musically. It serves as a time capsule for how young people of this generation feel. They have covered all corners with this album, and I am very excited to see what their upcoming album, Notes on a Conditional Form has in store for us in 2019.

Drayton is a college student from North Carolina with aspirations to work in the music industry. She enjoys photography, concerts, and discovering new music. Concert photography is her passion because it combines her favorite hobbies. She likes all genres of music, but her favorites are alternative and indie rock.
RELATED ARTICLES
album reviewalbum reviewsdirty hit
9.0