SPILL ALBUM REVIEW: STRFKR – BEING NO ONE, GOING NOWHERE 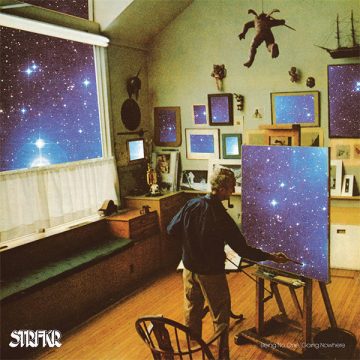 STRFKR
Being No One, Going Nowhere
Polyvinyl Records

Over the past few years there has been a trend of experimentation with vintage sounds in the ill defined field of indie-pop. With a multitude of lush 80s rhythms and synth textures reclaiming the airwaves you can imagine that it could be difficult to present something that is both nostalgic and fresh. In their latest release, Being No One, Going Nowhere, STRFKR (or Starfucker) manages to provide sounds that are both reminiscent of yesteryear and refreshingly experimental.

Conceived by frontman Joshua Hodge during a stint of exile in Joshua Tree and inspired by an epiphany in a BDSM club that “the appeal is letting go of your mind and stress. You can be super present with the pain, and then the pain isn’t even pain. It’s a gateway to freedom.” Being No One, Going Nowhere deals with some heavy themes by delving into finding one’s place in the universe, addiction, and conceptions of reality all while being backed by upbeat synths. STRKFR is no stranger to combing through deep and dark lyrics though with their previous releases often carrying philosophical messages and incorporating vocal recordings of English thinker Alan Watts pondering existence. Watts appear on almost all of their releases since their formation in 2007. Watt’s influence upon Hodges is clear through his lyrics presenting concepts pertaining to life and its ultimate meaning. And while the lyrics of Being No One, Going Nowhere may get you feeling a little introspective its vibrant and shimmery presentation is certainly friendly for dance floors.

Draped in 80’s esque synthesizers and grooving bass, opening track “Tape Machine” feels similar to STRFKR’s 2013 release Miracle Mile and gives us a chance to catch up to the band. Other tracks like “In The End” echo sounds of Italo-disco with beats provided by drummer Keil Corcoran and thick bass lines from bassist Shawn Glassford laced throughout. Sonically it is reminiscent of some of Tony Hoffer’s work with M83, Beck, and Phoenix all while seeking to push indie-pop further into experimental territories. With work done by producer Jeffrey Brodsky Being No One, Going Nowhere should sound at home rushing over club floors as well as pulsing through headphones.

Overall this latest insight into the minds of STRFKR provides both intelligent lyricism and ear capturing riffs that show a promising future for this Portland based indie-pop group. They are currently touring North America showcasing their LED panels along with the occasional crowdsurfing astronaut and band dressed in drag. Fellow Polyvinyl artist Psychic Twin is accompanying them for the next leg of their tour.

SPILL ALBUM REVIEW: STRFKR – BEING NO ONE, GOING NOWHERE

I am an Edmonton based musicophile and photographer who loves experiencing music whether it's live or on my turntable. I play seven instruments and go to a lot of concerts.
RELATED ARTICLES
album reviewsin the endnever ever
8.0