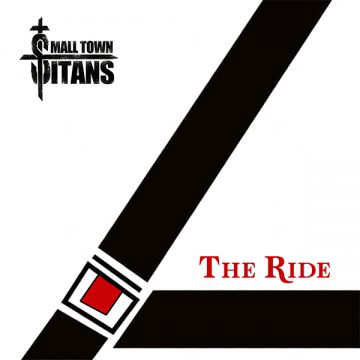 Perhaps best known for their viral covers – from rock classics like Queen’s “Fat Bottomed Girls” to their most viewed video, “You’re A Mean One, Mr. Grinch” – Pennsylvania’s Small Town Titans have been releasing a steady stream of music for a better part of the last decade, including an original EP and two full-length albums. Consisting of singles released over the past two years, including brand new material, the power trio has returned with their first album since 2016, The Ride.

Opening with their most recent single, “Rufflin’ Feathers”, Small Town Titans burst forth with an explosive and relentless opener driven by Phil Freeman’s throat-wrenching vocals and his tight bass groove locking in with Jonny Ross’ drums, allowing for guitarist Ben Guiles to lay down layers of intricate and ripping lead lines. The following track, “The Man”, proves to be just as hard-hitting with a simple, catchy riff and magnificently soaring vocals during the chorus, pairing with bellowing lows in the verse – Freeman’s vocal range and sheer power are incredible – “The Man”, when paired with “Rufflin’ Feathers” makes for a truly impressive opening that sets the bar for The Ride high.

Even more impressive than their incendiary opening,  is that Small Town Titans manage to surpass the heights they set during their first two tracks over the course of the following eight tracks through strong songwriting and some of the best musical performances you’ll find in modern rock. Throughout the course of The Ride, this is demonstrated time and time again. Take the blistering pace and System Of A Down inspired “Universal Limits” or the immediately contrasting energy of the folky acoustic ballad in tone with Temple Of The Dog, “9 To 5” as an example of range that can be heard on this record. Furthermore, their dark and jangly cover of Marcy Playground’s “Sex & Candy”, the shifting pulses of “When It All Comes Down”, the blues riffs and swagger of “Junkie For You (Hey Mama)”, and the closing, eight-minute epic that is “The Ride” are all highlights on a fantastic record.

Through refined songwriting and a beyond powerful performance, the band demonstrates their worth as one of the strongest rock bands making waves right now. One-hundred percent killer with absolutely zero filler, The Ride is an incredible display of modern rock that builds on the active rock style of the past two decades and infuses it with a much needed rejuvenating shot that returns a raw sense of danger and primal excitement to the genre. By all means, Small Town Titans have set the tone for the shape of hard rock throughout the coming decade on The Ride.

A passion for music has always been a part of Gerrod’s life. As a young boy, he was raised on a steady diet of the music from The Chili Peppers, Aerosmith, The Stones, Prince, and others from his mum. Raised in the GTA, Gerrod continued to foster his love for music by attending a wide range of concerts and learning the drums. His unapologetic passion for music has no bounds and has spread to a wide variety of styles, whether it be the 90’s rock that sound tracked his teenage years, the jazz he studied in university, or his newfound love for hip-hop. He recently received his bachelors in music and education from York University and is passionate about writing and reviewing good (and less than good) music. Gerrod is also the drummer and songwriter for a Toronto based rock & roll band, One In The Chamber.
RELATED ARTICLES
album reviewalbum reviewsantifragile music
9.0