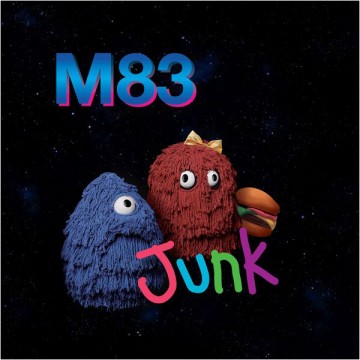 In every major artist’s career there is generally a record ascribed “the breakout album” and then, naturally, something called “the follow-up” follows… eventually. The breakout album speaks for itself. It’s the moment an artist tasted success, an expansion into pop-culture buzzworthiness and achieves some combination of critical and commercial notoriety. Someone’s father spoke the band’s name. A gig on Saturday Night Live. The “follow-up” meanwhile comes to fruition among increased scrutiny and expectation. Idle creation now happens with an audience in the room and the audience waits and waits, expecting further greatness. Having now listened intently to M83’s Junk, and futilely attempting to wrap my head how this album came to be, I now imagine that Anthony Gonzalez’s audience was an 800-lb. gorilla breathing hot gorilla steam down his neck at every waking moment. The gorilla was also wearing a Giorgio Moroder tour T-shirt from 1984, but that is neither here nor there.

2008’s Saturdays = Youth demanded attention. It was the album of a clear-eyed visionary. 2011’s Hurry Up, We’re Dreaming built upon the critical praise with commercial, crossover appeal. Songs like “Kim & Jessie” and “Midnight City” anchored Anthony Gonzalez’s status as the purveyor of emotional, synth-heavy headbangers that could superficially titillate and emote through lush electronic and organic orchestration. Junk, on the other hand, confounds and seems to make the statement that what he’s doing, or perhaps more accurately what all pop musicians are doing behind the magic curtain, is merely recycling bits and baubles that have been used and discarded by earlier artists. Depending upon your perspective, Junk might be a corrosive, challenging statement album. Or it might be a bit of titular self-loathing, the result of an artist struggling to find his center in an enigmatic industry that rarely rewards true achievement.

Gonzalez’s 14 sonic dalliances on Junk appear cobbled together with little thought to an overarching album construction. It’s a maddening assemblage of nostalgic twists and turns without a consistent throughway. I’ll stop short of actually calling Junk complete rubbish; beautiful, trademark M83 high points remain. But these more noteworthy tracks suffer under the weight of the recycled chaff on all sides.

Junk is less an album than a stream of consciousness under duress. It’s an interpretation based on expectation and the thorny, often thankless nature of “the follow-up” album. Snippets and images tossed to the seas, rescued only by the life preserver that is Gonzalez’s flare for drama and layered orchestration. When the album fades to black with the sluggish fade out of “Sunday Night 1987” the listener’s left wondering where it all went and if it even properly began at all.

The opening track and first single from the album, “Do It, Try It” tiptoes on the verge of atomic bombast before sliding back into complacent nether regions of electronic mixology. It’s the M83 version of an old favourite wool sweater that somehow remains itchy. Familiar. Friendly. But why is it still here? Shouldn’t this be donated to Goodwill? Steve Vai picks up the baton to churn through some Reagan-era guitar licks on “Go!” but the song never really strikes a chord. It’s fleeting ephemera, relegated to the moment. Weightless.

“Walkaway Blues,” a jungle of MIDI-loops and bloops and a vaguely Christopher Cross-ish vocals from Jordan Lawlor, offers a welcome respite from the chaotic opening. Junk excels when Gonzalez dials back the energy. The similarly paced “Solitude” stands out as an album highlight. Boozy and James Bond-y, the song weaves a five-minute opus with strings and luscious background synth. This is a slow jam that other slow jams listen to when they want to get in the mood.

Entering the middle nether regions of Junk, Gonzalez resorts to paint-by-numbers; on his broad palette, the pop music of his youth. To systematically detail the ways in which the album puts me over the edge, I’m going to retype my notes regarding specific songs verbatim. Normally my notes focus on songs that demand further attention, songs worthy or praise or derision. My experience with Junk resulted in something else entirely.

Regarding the song “For the Kids:”

M83 borrows Carly Simon for the afternoon. She sits in on a recording session and stays for afternoon mimosas in the studio couch, which smells like a damp Labrador. Simon leaves the sincere promise to “do that shit again.” Later on that night, sensing the track lacks gravitas, Anthony Gonzalez borrows his producer’s daughter to add a whimsical voiceover about weighty bits of nonsense – a familiar M83 tool. “I am the morning dust tickling your neck. I am the wind, mommy,” the child says. Welcome to Pop music by Terence Malik’s distracted cousin Archibald.

A high stakes game of five-card stud between early Hall & Oates, Howard Jones and the theme from St. Elsewhere ends, abruptly, after the third season when CBS elects to cancel the show Poker Among Theoretical Entities in favor of an Elementary spinoff starring Rhys Ifans’ Mycroft Holmes.

Before Junk concludes with a whimper, Gonzalez manages to remind us that he’s still a craftsman capable of transcendent moments. He again relies on his sense of pace and the power emotional swells, rather than catalytic urgency. “Atlantique Sud” ambles. It’s a sublime, minimalist track that pairs elegantly with “Solitude” and the brief interludes scattered throughout the album. Alternating male and female vocals (from his new regular vocalist Mai Lin, who appears on a number of Junk tracks) weave in and around a sleepy piano track. The strings again rise to prominence alongside the horns. It’s a beautiful moment, one lacking the artificial pretense found in abundance throughout the album.

I couldn’t help but compare Junk to Daft Punk’s Random Access Memories in form and function. Both are long-awaited records that trade in genre hopscotch and piratical reference. Swatches of Italo-Disco, soft rock, ‘80’s TV themes (I swear some A-Team riffs snuck into Junk) speak to both artists’ ability to hold aloft a narrow band of our musical heritage. The children of the ‘80s have commandeered our airwaves, mostly for good, rarely evil. The difference, however, is that Daft Punk has managed to display reverence for the source material. M83 appears disillusioned. Gonzalez has spoken in the past about his distaste for modern popular music, and I can’t help but feel that some of this cultural malaise has seeped into his own compositions.

M83 can no longer exist in the vacuum of its own meticulous creative process. His music has been featured in commercials. Hurry Up, We’re Dreaming has been worshipped as a masterpiece. Junk is what happens when outside expectations invade the creative process. Now that Gonzalez has purged his “follow-up,” I look forward to M83’s next record, the one without the steamy-breathed gorilla questioning his every move. May he again find that inner, far less cynical, voice of his generation.

James David Patrick has a B.A. in film studies from Emory University, an M.F.A in Creative Writing from the University of Southern Maine, and an honorary Ph.D. in bullshitting about everything else from the College of Two Pints. His fiction and non-fiction has appeared in PANK, Monkeybicycle, Squalorly, Specter Lit, and Bartleby Snopes among other wordy magazines. While he does not like to brag (much), he has interviewed Tom Hanks and is pretty sure you haven't. He bl-gs about music, movies, and nostalgia at thirtyhertzrumble.com and runs the James Bond Social Media Project at thejamesbondsocialmediaproject.com. James lives in Pittsburgh, PA.
RELATED ARTICLES
album reviewsjunkm83
6.0