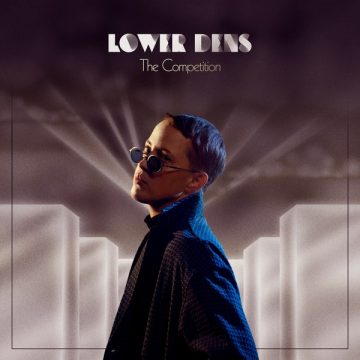 Baltimore’s Lower Dens exists on the cusp. In 2010 frontman and folk eccentric Jana Huntertired of touring as a solo artist and hired a backup band for the last tour before his planned hiatus. The experience of touring with a band renewed his enthusiasm for music. The cusp of nothing begat a new trajectory. Their shoegazey first album, Twin-Hand Movement, registered with critics but came across as unmolded play-dough. Hunter started writing the follow-up, 2012’s Nootropics, while touring in support of Twin-Hand Movement. This forced the songwriter to work through a laptop and keyboard rather than his guitar. Nootropics might have been forced innovation, but Lower Dens’ emergent krautrock and electro-tickled collection represented organic progress and found a more engaged audience. The cusp of college radio success. Lower Dens slid further into electronic dream pop soundscapes on Escape From Evil, abandoning the droning guitars and pushed the receding experimentalism further into the background. The resulting album brushed greatness, suggesting the perfect distillation of the band’s influences on standout singles “Ondine” and “To Die in L.A.” The cusp of something bigger, the cusp of the success achieved by fellow Baltimoreans Beach House and Future Islands.

Hunter and drummer Nate Nelson have called their sound “resistance pop,” which, ultimately, sounds more compelling and high-minded than the generic terms “synth-pop” or “dream-pop” that their new album The Competition will ultimately conjure from writers. Lower Dens aims to distance form from function. The form might be synth-laden indie pop music, but the function is an explicitly political statement about capitalism and how it corrodes “our intimacies, our communities, and our sense of self.” (You’ll be happy to know they’ve not buried the lede on the album’s press release.) If Escape From Evil admired the potential of the future, The Competition studies the horror of the now through a Reagan-era neon snow-globe soundtracked by Kraftwerk and Roxy Music.

“Galapagos” provides a proper – if overly familiar – opening hook. Synth-pop easy listening that grants access to the more daring cuts that follow on The Competition. “Young Republicans” depicts the corruptive right-wing agenda: “Born without souls or blood or skin/We’re young republicans.” Hunter connects moral and political disconnection with being a lost soul, irreparably damaged by a misguided ideology that provides a sense of place. The song hoists the listener out of complacency as much as it opens the album’s chest cavity to reveal a cantankerous and wounded heart. Subsequent tracks like “Real Thing” and “Simple Life” provoke the primitive emotional counterbalance and deliver Turner’s poignant messaging with less labour. “I Drive” evolves into The Competition’s centerpiece. The call-and-response vocals of Turner and :3LON blend and engage the track’s pleasure persistence. It’s not until the third or fourth time through that you’ll digest the song’s heartbreaking lament of how the siren song of traditional heterosexual coupling destroys homosexual relationships. “Could’ve had me / But you wanted the same old song” he sings.

Lower Dens excels when Hunter’s pleasantly strident vocals sear through the simple richness of the music. When the individual songs make every effort to deliver a message rather than allow the listener to sidle up in their own time, the subtlety fades and so does our emotional investment in the soundscapes. As a result, The Competition’s an admirably mixed bag. Lower Dens remain poised on the precipice of something bigger, falling just short of the greatness teased in fits and spurts during their decade of being a band on the cusp.

James David Patrick has a B.A. in film studies from Emory University, an M.F.A in Creative Writing from the University of Southern Maine, and an honorary Ph.D. in bullshitting about everything else from the College of Two Pints. His fiction and non-fiction has appeared in PANK, Monkeybicycle, Squalorly, Specter Lit, and Bartleby Snopes among other wordy magazines. While he does not like to brag (much), he has interviewed Tom Hanks and is pretty sure you haven't. He bl-gs about music, movies, and nostalgia at thirtyhertzrumble.com and runs the James Bond Social Media Project at thejamesbondsocialmediaproject.com. James lives in Pittsburgh, PA.
RELATED ARTICLES
album reviewalbum reviewslower dens
8.0