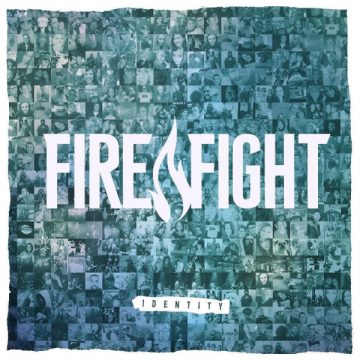 Let me be clear: Fire Fight is not your average rock or alternative band. They pull multiple genres together, including hip hop, to create their own unique sound, Nowhere is it more apparent than on their new album, IDENTITY.

The emotion-filled title track is a great representation of this sound with a chorus that will definitely get stuck in your head. Play it a few times — and I’m sure you will — and you’ll be singing right along.There’s a reason why it has over 60,000 plays on Spotify.

“Speak Up”has a great Top 40 sound, while on the other hand, hard-hitting “Seeing Red”, with what feels like Sevendust influences, has much more of a rock feel. Luciano’s versatile and clean vocals prove he can handle both styles with ease.

Fire Fight had a unique approach to their album release. The band held a unique “Listen/Delete” event via Facebook Live at the end of May in preparation for the album’s release. The album was streamed live in its entirety, co-hosted by the band with commentary throughout. They then took to social media and asked fans to submit selfies to form the collage for the album cover because“We can’t do what we do without the fans.” Over 300 contributed, and their names are now printed on the long sleeved Fire Fight shirts. They’re all about doing things differently, see?

The album includes a cover of Post Malone’s “Sunflower” and is, by far, the best version of that song I’ve ever heard. There’s also a cover of 5 Seconds of Summer’s “Youngblood” which contains a hell of a lot more emotion than the original.

Come join the fight, you’ll be glad you did.

Trista’s a music addict who’s taste in music spans over numerous genres. She enjoys playing her bass guitar, but honestly she’s not very good at it. So she goes to concerts and watches real musicians who are far more talented than her. You’ll find her there in the front row, because, well, she’s short and wouldn’t be able to see the stage very well otherwise, and because she strives to get the perfect photo to capture the experience.
RELATED ARTICLES
album reviewalbum reviewsfire fight
10