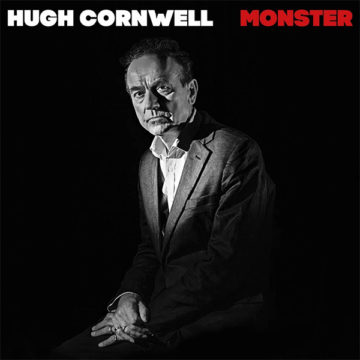 Hugh Cornwell’s mother, Winifred, is 98 years old, which is quite an achievement. Over the years Cornwell has heard various accounts about his mother, which, for him, formed two views of her, one positive (from the community), one not so much (family recollections). This was the inspiration behind Monster, no his mother is not a monster, nor is that title track about her, but the album is about famous (or infamous) people of the 20th Century, and public persona versus private. Also as the century passed, his mother would have been witness to all of the people of whom Cornwell sings. For the record, the title track “Monster” is about special effects wizard Ray Harryhausen.

Monster is a concept album and quite an original one. On this album, Cornwell sings about Evel Knievel, Lou Reed, Hedy Lamarr, Benito Mussolini, Phil Silvers and many more. This is not the first time Cornwell has written about famous people (“Whatever happened to Leon Trotsky” from The Stranglers’ song “No More Heroes”, which he covers on the bonus album with Monster), but it is the first time he has constructed an entire album around the subject.

Although he is singing about others, he is ultimately singing about himself. Not so much as an autobiography, but the impact these people had on him. Listen to “Mr. Leather” about Lou Reed. It is not really a tribute, but rather Cornwell reflects on Reed and himself. “Dear Lou,” sings Cornwell, “try as you might, your compass just wasn’t behaving quite right.” Cornwell has often not fit a certain type, whether in The Stranglers or solo. Also, check out his ‘impersonation’ of Reed, which is spot on.

Monster is Cornwell’s ninth solo studio album since going solo. When you add the four collaboration albums (the best being his work with John Cooper Clarke in 2016, This Time It’s Personal), and five live albums, one can see that Cornwell has been very busy since leaving The Stranglers in 1990. Of course, The Stranglers have soldiered on without him, and for my money, Cornwell’s albums have proven to be much more interesting and satisfying.

Here, he kicks it up a notch. This is perhaps his strongest solo album since 1997’s Guilty, and it might be ever better than that album. For me, the down side of this release is the bonus disc of Stranglers songs. The bonus album is titled Restoration, and it features Cornwell taking on ten Stranglers songs, with just an acoustic guitar. Interesting, but far from essential. And although his voice is as good as it has ever been, they had me reaching for my Stranglers LPs.

Musically, Cornwell is not breaking new ground. He has been over this territory before but that is fine. It suits his voice and it suits the mood. Cornwell is a genius and Monster is just another example of his brilliant work. He may have started in the punk genre, but Cornwell was never punk, he was always a storyteller, stories that also were a personal reflection of him. Monster is a continuation in that direction and a very successful one at that. Skip the acoustic album and stick with Monster.

Born and raised in Whitby, Aaron discovered music through his love of The Beatles. This led to a career in radio, writing for various publications, and ultimately a radio show about The Beatles (Beatles Universe), which ran for over four years. When not immersed in music, Aaron enjoys spending time with the loves of his life -- his wife Andrea, and daughters Emily and Linda (all of whom have an intense love of music too).
RELATED ARTICLES
album reviewalbum reviewshugh cornwell
9.0