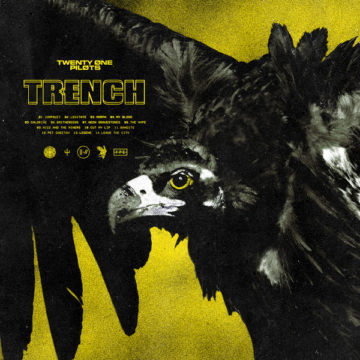 The band with the unidentifiable genre is back. Twenty One Pilots have released their fourth LP Trench after the mainstream success of their 2015 release Blurryface.

Introductory track “Jumpsuit” is the first single off the album. It definitely sets the mood and is the most energetic song here. Its bass riffs bring a slightly more organic or less poppy feel to their music. It feels matured.

“Neon Gravestones” is by far the best track that’s not a single on this album. It’s quiet but powerful, dealing with the glorification of celebrity suicides. Every component of the song makes for a haunting track: the piano, the supporting synths, and the lyrical content.

After that emotional (but important) roller coaster, we have “The Hype” which is a nice lift after “Neon Gravestones.” It has a big ’90s Britpop vibe, much like Oasis’ “Wonderwall, especially in the chorus. The song has lyrics that are easy to pick up and sing to. In a live setting, it would be nice to wrap your arm around the person next to you and chant along. Great followup song.

“Nico And The Niners” is one of a few songs here that uses reggae as inspiration as they have done on past albums. This is the most lyrically cryptic track as it follows the narrative that the album tries to convey. It’s not clear instantly what that narrative is unless you try really hard to look for it.

By far the least impressive track, but still a pleasant listen is “Cut My Lip.” The beginning piano chords and drum beats seem like a slowed down version of parts of “Heavydirtysoul” from their previous record. Fans may hear this track and feel like they’ve heard this before from this band.

This whole album compared to their earlier one is darker in content, maturer in sound, and will please listeners old and new. The production and dynamic sound are outstanding. They are reinventing genres to make one we’ll finally have a name for some day.

Vicki Mahony is taking her hobbies of concerts, photography, and ranting and putting them to good use! She is a live-music photographer and reviewer.
RELATED ARTICLES
album reviewalbum reviewsfueled by ramen
7.0