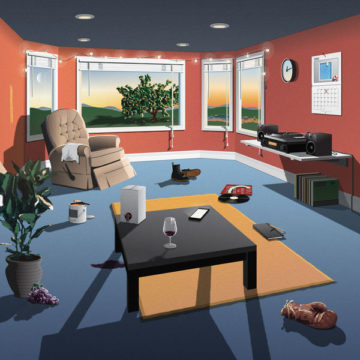 The full-length debut from Minneapolis-based Hippo Campus, Landmark, is a well-written, complex, and atmospheric collection of alt-rock tunes that not only makes the listener think, but is easy to simply lose yourself in.

Landmark is an album that says a lot, but at the same time is pleasantly soft-spoken. It is characterized by sweeping vocals seeped in reverb and similarly ethereal-sounding guitar lines, which are an excellent complement to the extremely complex and introspective songwriting. Songs such as “Way It Goes” and “Simple Season” reflect on experiences of days past and look hopefully to the future, painting a beautiful imagery of pastoral winters and hot cocoa as they go. If the goal of Landmark was to make the listener really pay attention to the lyrics, it certainly succeeds. This is because the instrumentation throughout the entire album is rather subtle, and gives way very easily to the melodic lines and lyrical ideas that the vocals put through.

The instrumentals in no way take a back seat to the vocals, however. The well placed pads, infectious guitar lines, and driving percussion make Landmark an album that, even with all of its subtlety, very danceable. But it’s not the same kind of danceability that you’d find in club anthems that you’d typically associate with the word; rather, Landmark is a good album to close your eyes and sway to. While this rings true for basically every song of the album, Landmark also does a good job at maintaining variance. It’s not completely perfect, as it’s easy for every ethereal-sounding song to start to blur together if you’re not paying attention, but you can see the diversity in the tracks when you look at the more upbeat “Western Kids”, the soft ballad “Monsoon”, and songs like “Epitaph”, which fall somewhere in between. The album also demonstrates a proficiency in being able to transition between its tracks, as well; this can be seen in the transition between “Monsoon” and the mellow “Vacation”, as well as the transition between the prelude “Sun Vines” and “Way It Goes”, which is particularly effortless.

Landmark manages to be jam-packed with atmosphere and imagery without also being too overwhelming. Listening to it is certainly a journey, but it is a relaxing and stimulating one. Don’t be surprised if you find yourself giving this album a go while staring out the window of a moving car.

Kysan Kwan hails from Ajax, but is currently in the Music Business program at Berklee College of Music in Boston, Massachusetts. His love for music started in high school, where he went through his "rebellious teen alt-rock" phase before becoming open to all genres of music from EDM to smooth jazz. Kysan also is an enthusiastic concert photographer and has his own college radio show, where he seeks to introduce the American public to the best of Canadian indie.
RELATED ARTICLES
album reviewsgrand jury musichippo campus
8.0